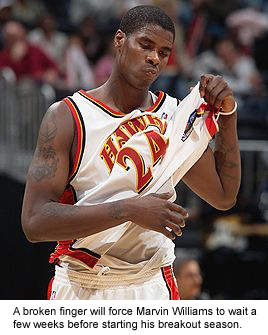 Today, I launched my second season at the helm of Position Battles, a weekly NBA column at RotoWorld focusing on playing time issues around the league.

This week, there was a ton of stuff to go over, including how Marvin Williams’ injury opens the door for his one-time archrival from the ACC, Shelden Williams.

We also cover the situation in Charlotte, where hyped rookie Adam Morrison will have to start his career on the bench.

You’ll get all of this and tons more fantasy basketball insights in this week’s Position Battles.