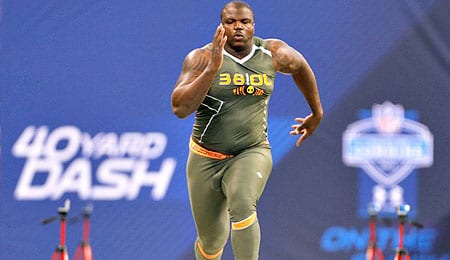 The 2014 NFL Draft is drawing near and we at RotoRob.com have dusted off all our football writers to give you a three-part series of mock drafts. In January we did some mock drafts for the non-playoff teams. Obviously with the free agency period behind us and the full draft order set, we have many new ideas for you. Now we give you our first full NFL Mock Draft by the seriously zany Josh Johnson.

We believe this to be the deepest draft in years. We opted to leave the draft day trade scenarios to the real GMs, but we would like to note that if Teddy Bridgewater, Blake Bortles or Johnny Manziel get past Oakland at pick five, look for Tennessee or maybe even Dallas to move ahead of Minnesota.

1. Houston Texans — Jadeveon Clowney, DE, South Carolina Gamecocks: Many experts finally agree that Clowney has superior talent. Once mention of the J.J. Watt-Clowney pairing started circling in late January we figured this pick was a lock. A second tier QB is what the Houston fans deserve after they burned Matt Schaub jerseys last year.

2. St. Louis Rams — Greg Robinson, OT, Auburn Tigers: This is a safe pick but considering QB Sam Bradford’s health issues, playing it safe seems reasonable. This division is full of solid defenders so Robinson will need to learn quickly and we think he is up for the challenge — especially given his speed, which was all the rage at the Combine (see video below).

3. Jacksonville Jaguars — Sammy Watkins, WR, Clemson Tigers: This dude is legit. After an underrated free agency period we see the Jags making a big splash by grabbing the truest playmaker to come out of college since Calvin Johnson. Watkins would make this offense respectable even if Chad Henne is the QB.

4. Cleveland Browns — Blake Bortles, QB, Central Florida Knights: Since the glory days of Brian Sipe and Bernie Kosar Cleveland has been searching for a franchise QB. To us, Bortles appears to be a crossbreed of Andrew Luck and Dante Culpepper. Bortles can be the Browns saviour. He has shown poise and strength when needed. If the Browns ever find a running game, Bortles can lead them out of obscurity.

5. Oakland Raiders — Johnny Manziel, QB, Texas A&M Aggies: While we understand that Schaub was brought in to be “the man,” taking Manziel here still makes sense. This would provide Manziel the time to watch and learn for at least a year. His attitude and swagger fit the Oakland style of play. Johnny Football could be the franchise QB Raider fans have been praying for, given he has time to mature slowly.

6. Atlanta Falcons — Khalil Mack, OLB, Buffalo Bulls: The Falcons have skill position players, but they need an athlete on the edge. Lots of experts think Mack will be a superstar, but we only think he will be good, not great. If Atlanta had really big balls it would draft Anthony Barr instead. Unfortunately the Falcons will bite the hype hook and draft Mack. Still, considering how bad their defense was last season he is at the very least an upgrade.

7. Tampa Bay Buccaneers — Jake Matthews, OT, Texas A&M Aggies: Other than Watkins we think Matthews is the safest pick of the draft. He is an aggressive cat who doesn’t ever peel off a block and he is very effective with his hands. Tampa can build its offense around Matthews, who will likely play in five to eight Pro Bowls before he calls it a day.

8. Minnesota Vikings — Teddy Bridgewater, QB, Louisville Cardinals: Basically, we feel Minnesota would be elated if any of the top three QBs were still on the board. At this point it seems it will be Bridgewater. We believe the smoke screens surrounding him are thicker than water. The talent oozes on the field during games, so who cares about some wobbly Pro Day pass? Bridgewater is the only QB that we would start Week One of the 2014 season but if the Vikings are smart they will let him watch Matt Cassel for a year.

9. Buffalo Bills — Anthony Barr, OLB, UCLA Bruins: Barr is a savage pass rusher with great agility and balance. He is a former running back so his abilities at OLB are very rare. Barr will give Bills opponents someone else to game plan for, which will open up space for the great Kiko Alonso.

10. Detroit Lions — Mike Evans, WR, Texas A&M Aggies: No way the Lions could pass on Evans here. With Megatron on the same field, Golden Tate and Evans will be Fantasy crushers. Evans will learn how to be a big WR in the NFL on a daily basis.

11. Tennessee Titans — Eric Ebron, TE, North Carolina Tar Heels: The current Titan receiving corps will be Ebron’s biggest fans and beneficiaries. We feel the Vernon Davis comparisons are actually an understatement. Unlike Davis, Ebron will not disappear in crunch time. Athletic tight ends (i.e., Jimmy Graham, Jordan Reed) are the new standard and Ebron could the best yet.

12. New York Giants — Ha Ha Clinton-Dix, FS, Alabama Crimson Tide: Is Clinton-Dix a victim of the mature defense system? If you have asked that question you probably hate the SEC. He understands his responsibilities and QBs and WRs will grow frustrated because he will prevent so many plays from becoming big gains or even completions.

13. St. Louis Rams — Justin Gilbert, CB, Oklahoma State Cowboys: Speed can overcome so much. Gilbert will add a dynamic dimension to an already solid defensive scheme. His playmaking skills as a defender could earn him the defensive Rookie of the Year nod.

14. Chicago Bears — Aaron Donald, DT, Pittsburgh Panthers: This athlete can change the mold of what we believe an NFL DT should look like. Donald is not a 330-pound biscuit eater. He is a 285-pound speedboat that will have QBs running from the pocket. Donald has the potential to be a sack master at DT like the no other NFL player has before him.

15. Pittsburgh Steelers — Taylor Lewan, OT, Michigan Wolverines: Old school Steeler football will flourish when Lewan tramples defenders. If he lasts this long in the draft, Pittsburgh will have a future All-Pro with an insatiable mean streak. That’s the Steeler way.

16. Baltimore Ravens — Zack Martin, OL, Notre Dame Fighting Irish: It has been said Martin is the most versatile O-lineman in the draft. His ability to play five different positions at a high level automatically makes him a first rounder. Martin flattened any critiques with a gaudy Senior Bowl week. The Raven ground game shall be relevant again.

17. Dallas Cowboys — Darqueze Dennard, CB, Michigan State Spartans: When Dennard lasts this long, Dallas will have to bite. The NFC East is loaded with great WRs and slowing them down should be a top priority. Dennard will be a respected and feared NFL player.

18. New York Jets — Calvin Pryor, FS, Louisville Cardinals: The Jets need a player like Pryor. He is an aggressive run stuffer that should improve an already good New York D. Pryor is a ball hawk and a top-notch open field tackler. He just makes sense for the Jets.

19. Miami Dolphins — C.J. Mosley, ILB, Alabama Crimson Tide: We know the Fins need O-linemen, but if Mosley falls this far it would be a logical choice. He has had health issues and that is always a concern. Mosley is an instinctive ILB much like Mike Singletary. Mosley has thighs like watermelons and that helps drive his power game.

20. Arizona Cardinals-Dee Ford, DE, Auburn: Overrated you say? We are still on the fence. We love his hand whipping first move but to make that work in the NFL he needs to hit the weight room.

21. Green Bay Packers — Timmy Jernigan, DT, Florida State Seminoles: We can’t ever remember an interior lineman with such fast feet. Those twinkle toes strengthen his solid legs and high motor. Jernigan will flush the pocket and Clay Matthews will be ready to pounce.

22. Philadelphia Eagles — Brandin Cooks, WR, Oregon State Beavers: Good Lord, why would Chip Kelly draft a Beaver? The answer is easy: he loves speed! Cooks is small, but he is tough. He will not cry like DeSean Jackson. Cooks will outwork everyone on the field.

23. Kansas City Chiefs — Jace Amaro, TE, Texas Tech Red Raiders: Amaro’s hands are very nice and the Chiefs need weapons like this. Head Coach Andy Reid always plays to his strengths and Amaro can be a strong presence for this offense.

24. Cincinnati Bengals — Kony Ealy, DE, Missouri Tigers: Cincy is a bona fide playoff team. Although the Bengals can’t seem to win in the postseason, it’s apparent they are a piece or two away. Ealy can help them claw deep into January. He is a restless force. With Ealy trimming the edge and Geno Atkins charging up the middle, the Bengals can nab a few more wins.

25. San Diego Chargers — Louis Nix III, DT, Notre Dame Fighting Irish: Defensive vulnerability can often be traced back to a weak middle. The 330-pound Nix can fill many gaps. Peyton Manning and Jamaal Charles shall be wary — this is their official warning.

26. Cleveland Browns — Kelvin Benjamin, WR, Florida State Seminoles: Believe what you will about the so-called “workout blow off.” Cleveland has a dynamic WR in Josh Gordon and its TE Jordan Cameron looks to be the real deal. Benjamin can provide a big “move the sticks” type of target.

28. Carolina Panthers — Marqise Lee, WR, South California Trojans: Lee drops here because of a knee injury much like Keenan Allen did in last year’s draft. The Panthers lost their top three WRs this offseason, so getting a talent like Lee that can start immediately is paramount.

29. New England Patriots — Austin Serefian-Jenkins, TE, Washington Huskies: If Rob Gronkowski is healthy or not, Serefian-Jenkins will be a difference maker. Serefian-Jackson can block and catch like no other TE in this draft. His massive build makes him a red zone mismatch.

31. Denver Broncos — Ryan Shazier, OLB, Ohio State Buckeyes: If Shazier weighed 20 more pounds he would be a top 10 pick. At 6’1″, 237 pounds, he is a slender juggernaut. Shazier’s 4.38-second 40-yard dash prompted many scouts to vault him into the first round. Denver gets a player who can change the complexion of a game with one bone crunching tackle. With DeMarcus Ware as a mentor Shazier will have All-Pro potential for many seasons to come.

32. Seattle Seahawks — Jordan Matthews, WR, Vanderbilt Commodores: We know we are overrating Matthews here, but before you judge watch some video of this guy. He can be a reliable and consistent weapon for a team already bursting with talent.

35. Cleveland Browns — Cyrus Kouandjio, OT, Alabama Crimson Tide: Would go higher if not for his knee.

59. Indianapolis Colts — Ra’Shede Hageman, DT, Minnesota Gophers: He may have first round talent.

Other notables that we really like in the final three rounds and the teams of interest:

Now it’s your turn. Let us know in the comments below how you see the 2014 NFL Draft shaking out.