The Wire Troll: Mike Goodson Worth a Look 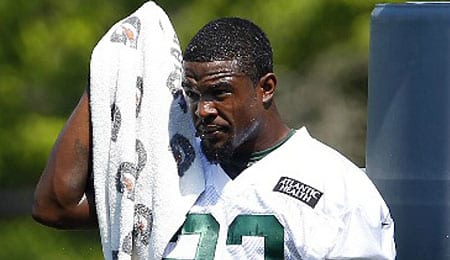 Mike Goodson is worth a flier in Fantasy leagues. (AP file photo)

Each and every week of the NFL season some random players emerge from depth charts and make an impact. When this happens, fodder is produced for Fantasy owners to debate over. As such, we present to you the Wire Troll for Week Six.

Matt Schaub, Houston Texans: Most will trim QBs like Schaub once their starter has had their bye week. Others will see his INT rate peaking and view him as a curse (see video below to get a sense of how some people feel about him). However, Schaub can be the ultimate bye week replacement. He has weapons in Andre Johnson, Owen Daniels and DeAndre Hopkins and he’ll face Jacksonville in Week 12 when E.J. Manuel (assuming he’s returned from his injury), Andy Dalton, Michael Vick (Nick Foles) and Russell Wilson are all on byes. Adversity is adversity but when it happens early in the season lessons are easier to learn.

Andy Dalton, Cincinnati Bengals: At this point, Dalton can be considered a young Alex Smith. He will never explode for massive Fantasy games but Brandon Weeden and Sam Bradford do less with more. Dalton does have A.J. Green and a budding TE combo in Tyler Eifert and Jermaine Gresham, but many owners will be fed up no TD passes in the last two weeks. Still, Dalton may not be available yet, but he does play the Jets in Week Eight when Jay Cutler, Andrew Luck, Jake Locker, Philip Rivers, Joe Flacco and Schaub are all on byes, so he could be a top tier performer that week.

Mike Goodson, New York Jets: This is long shot so just throw a dollar down or file his name deep in the curds of brain. PPR leaguers take notice: We realize he is not Darren Sproles or even Danny Woodhead, but Goodson can produce on a Jacquizz Rodgers type of level so he can be a bye week filler even when the Jets have a tough matchup. Geno Smith will love throwing to him in third-and-five situations.

Pierre Thomas, New Orleans Saints: So Thomas found the end zone twice in Week Five? Well, he had been almost invisible until that game. With Mark Ingram out, Thomas has been worked into the elaborate Saints offense. With Sproles and Jimmy Graham demanding attention, Thomas took advantage because Drew Brees gave him the opportunity. Trust has been established but proceed with caution because Brees spreadeth the pigskin.

Jeff Cumberland, New York Jets: Cumberland is built like defensive end and he plays with tenacity of a middle linebacker. He could be the ultimate bye week replacement and kudos to you if you had him employed as such in Week Five as he recorded three receptions for 79 yards and touchdown. Cumblerland currently shares TE duties with Kellen Winslow, but with Cumberland being the better blocker and the Jets getting healthy and more versatile, he can be the safety valve in key situations.

Rueben Randle, New York Giants: Randle will get several views and many dollars as a waiver wire darling this week after his two-TD performance on six receptions for 96 yards. Tread with waders because the Giants suck and don’t look past the fact that Randle only has 17 receptions on 36 targets. Also Victor Cruz and Hakeem Nicks are entrenched as the starters. If the G-men continue to play from behind, Randle with see more targets. With a non-existent running game all signs point to a lot three wide out packages.

Jerricho Cotchery, Pittsburgh Steelers: Slowly the Steelers are realizing that Cotchery can be solid number two. Antonio Brown is numero uno in this offense and Emmanuel Sanders is a good player, but he struggles as an every down player. The Steelers are destined to air it out because they need wins like a gasping fish on the side of the boat needs water. Sanders has 20 receptions on 38 targets for 231 yards and zero TDs. Cotchery, who started the year as the slot man, has 15 receptions on 26 targets for 248 yards and two TDs. Both of them can be great bye week replacements, but Cotchery should be the one you claim. He is veteran with so much more on field exploits than Sanders. Pittsburgh can still salvage this season but the maturing of Sanders can wait.

Keenan Allen, San Diego Chargers: Allen’s speed made him a red zone target often on Sunday vs. Oakland. With Malcolm Floyd lost for the season, rookies like Allen and Vincent Brown are needed. Eddie Royal is the vet in the rotation, and Brown has done well but Allen is a superior talent. With the Chargers at 2-3 and starting running back Ryan Matthews out for a month, Allen figures to see a lot more production. His bursting speed was a pleasant surprise, as San Diego took a chance on drafting this kid in the third round. Allen suffered grade 2 PCL tear last October while playing for the California Bears and his recovery took longer than expected, but he really seems to be getting stronger as he continues to make plays.

By Josh Johnson
This entry was posted on Tuesday, October 8th, 2013 at 2:14 pm and is filed under FOOTBALL, Josh Johnson, The Wire Troll. You can follow any responses to this entry through the RSS 2.0 feed. You can skip to the end and leave a response. Pinging is currently not allowed.