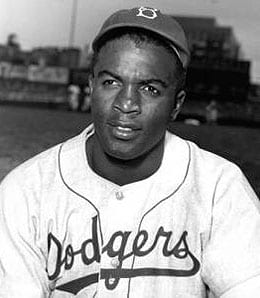 Yes, plenty of people are growing tiresome of this annual event and the invariable confusion it brings when watching games on that day.

To those people, we offer the following rebuttal: screw you. Suck it up for a day, and use that time to think about what Robinson had to endure over the course of his career, and really his whole life. The man with game-changing speed (see video below) could never run fast enough to escape the hatred directed his way.

Speaking of which, a couple of months ago, we finally saw the film 42. While it was quite enjoyable, we feel like the true depth of Robinson’s plight was glossed over to an extent.

At any rate, we just didn’t get the sense that the importance and magnitude of what Robinson accomplished was portrayed well in 42. Did he cure cancer? No. Did he usher in world peace? No. But Robinson’s place in history deserved greater impact than 42 delivered.

Now it’s your turn. Let us know in the comments below what you thought of the movie 42.

Crave more in-depth Fantasy analysis? Then join us every Thursday at 9 p.m. EST for RotoRob’s Fantasy Baseball Weekly Podcast on Blogtalkradio as we entertain and edify you for an hour or more each week. We’re off this week because of the NHL Playoffs, but RotoRob will return on April 24 with RotoRob.com NFL Writer Vaney Hariri. We may have a special guest, as well (Bob Kendrick, President of the Negro Leagues Baseball Museum). Tune in here.