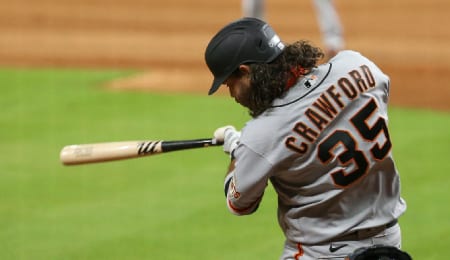 The San Francisco Giants have undergone countless changes over the last decade, with precious little left to connect them to the dynasty that resulted in three World Series titles over the course of five years.

However, one constant since 2011 has been the presence of Brandon Crawford at shortstop. He’s been a virtual fixture in the lineup over this time, so if you thought it was a good bet that his time as a starter would end this season, then we suggest you try finding some bookie sign up offers, because you’re clearly a player!

Crawford was mostly known for his defense early in his career, but he continually got better with the stick, leading to a career year in 2015, when he bashed 21 homers with 84 RBI. The following season, he had career highs in runs, hits, triples, steals and BA, while matching the RBI count. However, Crawford has more or less been in decline since — both at the plate and in the field. He remains a solid gloveman, with a very strong arm, but his advanced defensive metrics have declined dramatically over the last three years.

Last year, he remained the starter, but his game really dropped off, especially from a slugging perspective. After an ugly start, Crawford seemed to revitalize his game in May, and was even better in June and especially July before fading badly down the stretch.

So far this season, things have gotten even worse for Crawford, to the point where he’s sitting against lefties. It’s a bitter pill to swallow for a dude that far and away leads the team in games played since he debuted. Clearly, whatever “adjustments” he talked about making heading into this season (see video below) have not had their desired effect.

Crawford remains a real leader on this team — especially with Buster Posey having opted out and Madison Bumgarner leaving as a free agent in the winter. But the Giants are already in a huge hole this season, so it behooves them to look to the future, which likely means more action for Mauricio Dubon and the red hot Donovan Solano, and more pine time for Crawford, who now looks like a hold in just the deepest of NL-only leagues.

Crawford is desperate to win back his everyday gig, but unless he enjoys a major resurgence over the next month or so, his role as a part-timer will likely be cemented.

Julian Marley, son of reggae legend Bob, embarked on his own career as a reggae musician starting in 1993. Here he is with the Uprising Band, performing “Heathen” at the Live Africa Festival in 2011.

Now it’s your turn. Let us know in the comments below how you think Crawford will do for the remainder of this season.

By RotoRob
Posted in BASEBALL, MLB Today, RotoRob | No Comments »

By RotoRob
Tags: Will Clark
Posted in BASEBALL, MLB Today, RotoRob | Comments Off on MLB Today: Will the Thrill Gets His Due