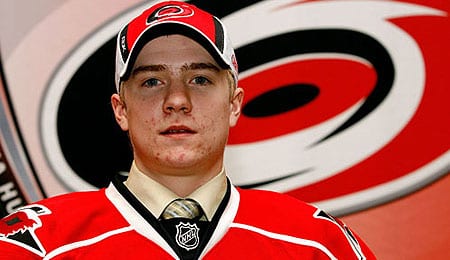 Zac Dalpe could be this season’s Jeff Skinner for the Hurricanes.

The 2011-12 RotoRob NHL Draft Kit rages on today with a list of everyone’s favourites — sleepers!

Let us take a peek into the “crystal ball,” so to speak, and try to find some solid sleepers for everyone to keep an eye on in the 2011-12 NHL season.

2. Gabriel Landeskog, LW, Colorado Avalanche: This does not sound like much of a risk but with Colorado, you never know. If Landeskog is paired with Paul Stastny and David Jones, then expect the unexpected. The Avalanche is a team of potential along with potential contradictions and conflicts. If his linemates stay healthy, Landeskog can not only create his own offense but thrive with the others. That potential alone makes him a worthwhile sleeper and Calder candidate.

3. Mikael Backlund, C, Calgary Flames: Consider yourselves lucky that you read this. Backlund has the goods and is ready for top six ice time. He is 22, but still a little raw to a point. However, if he gets the ice time, Backlund will get you the points you need. Playmaking skills are plentiful with him. Simply he plays more and more aggressive when skating “downhill.” There is the chance that Backlund even breaks 50 points in the 2011-12 season and we expect his production to increase as the season progresses.

4. Mattias Tedenby, LW, New Jersey Devils: People will say the Devils do not have much in their system but that could not be further from the truth. New Jersey prospects just tend to bubble up to the surface when no one looks it seems. Tedenby did struggle to tally goals at the end of last season, but clearly he was on the verge of something bigger as the campaign ended. It is not unreasonable to think that with the right linemates (maybe Zach Parise), Tednby could tally 45-to-50 points or perhaps more. The combination of being small and artful cannot be underestimated in today’s NHL, Fantasy hockey fans.

5. Pierre Marc-Bouchard, LW, Minnesota Wild: Yes, we are going to bite here because of that nagging feeling that when healthy, there is too much talent to pass Bouchard up late in your draft. The injury problems seem to be behind him and Bouchard is another playmaker on this list. That is a trend with sleepers lately. A whole season with Mikko Koivu will make Minnesota fans at least have something to smile about this hockey season.

6. Jakub Voracek, RW, Philadelphia Flyers: If a Top six role does not work here, then there is not much hope for Voracek. Even Philadelphia’s second PP unit could be scarier than most think. There is enough room for Voracek to actually come close to the 60-point plateau. His one-on-one skills are above average and with his physical nature and the fact that this is a contract year, there is more room for improvement. The environment is right and so is the timing.  Let’s see what happens this season, Fantasy hockey fans, and may we suggest you take a roll of the dice here.

7. Kyle Turris, C, Phoenix Coyotes: Turris, whether he plays in Phoenix or not, will be pushed into a top six role at the very least. More than likely, he will make a decision regarding his contract negotiations soon enough and he will flourish later rather than sooner. Later usually is the time in Fantasy hockey leagues when you want a player to take it that next step. His upside is too good to even think about passing him up at this juncture especially in keeper leagues.

8. Marcus Johansson, C, Washington Capitals: From a centre of gravity perspective, this player is one of the best in the NHL that few know about. Simply, Johansson is going to become more and more of a problem for opponents to handle as the season goes on as well as in the future. At some point, he could even crack the first PP unit at times and that will result in a nice increase in production. So take our advice and run with Johansson, who could jump a good 20 points from last season which means he’s capable of approaching 50 points.

9. Zach Bogosian, D, Winnipeg Jets: This is going to be a considerable risk, ladies and gentlemen. Bogosian has many rough edges but is only 21 and signed a two-year deal in the offseason to stay. He worked harder than ever in the offseason to develop his strength and conditioning which could pay some defensive as well as offensive dividends. While Bogosian might not become Dustin Byfuglien or Tobias Enstrom, he could benefit if Byfuglien is put back into the forward corps for the Jets. Maybe there is hope this season that was not there last season.

10. Tomas Tatar, C, Detroit Red Wings: This is the last real risk we take here because sometimes you hear Detroit and Swedish in the same sentence and think “Jackpot!” While Tatar may play in Grand Rapids (AHL) again to start the season, an injury is likely to pop up that will send him back to the big club where he could make that impact. He should be drafted now in keeper leagues if he has not been plucked already.

Well, there is our list, ladies and gentlemen, as we put in a heaping helping of rookies, prospects, old, and young alike who could surprise this season. Give us your lists and let’s get this Fantasy hockey season started with a bang.

There is potential to be had, so if you do not draft one of the first six or seven goalies, you can slide down into the second or third tiers and do just as well. However, goalie runs have been common in drafts so you do want to keep that in mind. Especially because of goaltending, you want to actually show up to your draft.

With hockey season around the corner, it’s time to launch into the 2011-12 RotoRob NHL Draft Kit, starting off with a look at the top 40 blueliners in Fantasy hockey.