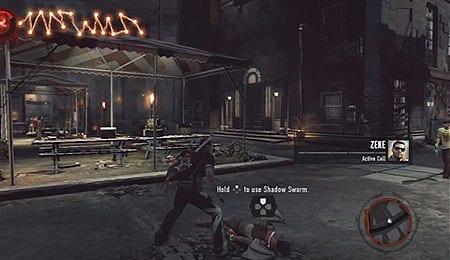 The game takes place all in one dark and gloomy night.

Developer Sucker Punch delivers some Halloween-themed gaming with Infamous: Festival of Blood, a standalone spin-off from the Infamous series. Proving that zombies aren’t the only horrors allowed to be brought late into a franchise, it adds vampires to the story for no real reason. It brings some new original missions to the tried and tested gameplay mechanic, but is it fang-tastic or does it just suck? (Sorry.)

As you dive in fairly quickly, the game assumes you have some familiarity with the series’ control scheme, and in no time you’re in full shooting mode. New players, therefore, might find some difficulty adjusting, especially given the amount of abilities that unlock fairly quickly. When you know what you’re doing, however, everything works very well, and once I was used to it again, the controls never got in the way of the gameplay. I particularly enjoyed the new first-person flying mode, allowing Cole to soar through the city with relative ease.

You’re unlikely to find a much better looking standalone game for this price on the PlayStation Network. Being a spin-off from a full disc game certainly gives it an advantage, but the full 3D world, the setting and the sheer power of all the electric abilities make this a treat for the eyes. While the city itself is a little generic, the eerie atmosphere makes up for it. While not scary per se, this is a spooky little game, entirely suitable given the subject matter.

I love some of the little touches, such as the colour alterations when in vampire sense mode, and I’ve always been a fan of using beautiful comic-style illustrations to move the story along. The festival adds greatly to the mood as well, with fireworks, people in costume and giant balloons populating the sky.

Production values on the sound design are not as high, but they’re still good nonetheless. I’ve always found Cole’s voice a little too gravelly, and I definitely noticed repeated lines from NPCs a lot, but these are forgivable flaws given the overall creepiness of the experience.

The game seems to have little to do with the rest of the series, other than the main two characters, and is mainly an excuse to add vampires to the formula. A powerful vampire has turned Cole, our hero, into one of them, and he has until sunrise to kill her and reverse the curse. This allows you to have some cool vampire powers while still being able to fight off hoards of the undead. There’s no sympathy for the creatures of the night here: this isn’t Twilight, or even True Blood.

Most of Cole’s electricity-based abilities are carried over from the other games, with lightning bolts and other projectiles to fire wildly into crowds. Indeed, most of the gameplay is very similar to other games in the series, although this is a lighter version of it — with a shorter overall campaign length the powers never get the chance to upgrade to the devastating potential of a full retail game. The biggest addition is a cool bat swarm ability, allowing you to fly around in first person. The morality system, one of the things Infamous is known for, is gone, and rightly so. As when the game tells you to bite innocent people to refill your blood meter, all possibility of a good path disappears.

As this is a smaller game, the scope of the open world is decreased significantly. You’re limited to one island here, and I found myself recognizing the same areas over and over. I’ve always found the series to have a fairly generic setting, and while a “Day of the Dead” type festival spices things up a little, there are no particularly memorable areas or set pieces. This is not necessarily a game for exploration.

The majority of the story is spent in combat, with a little light detective work thrown in. Kill a bunch of bad guys, move to the next area, lather, rinse, repeat. You’d think this formula would give you a nice variety of enemies, but sadly that is not the case, as there are basically only three: dudes that punch you, dudes that shoot you and big mini-boss dudes that are less threatening than they seem. Still, they all tend to provide a decent challenge, and battles kept me on my toes in the best possible way.

Oh, and there are user-generated missions, but my advice would be to stay away from these for the most part. I definitely found none I enjoyed, and they are nowhere near the quality of professionally-made adventures.

Perhaps the most important thing to mention is the length. With only seven proper missions, and some easy and fairly unimaginative trophies to hunt, I finished Infamous: Festival of Blood (including all upgrades) in less than 24 hours. I’ll bet some hardcore players could beat it in one sitting.

It may sound like I’m down on the whole thing, but the truth is I really enjoyed Infamous: Festival of Blood. I actually appreciated the short length — it doesn’t overstay its welcome, and is paced well enough to be enjoyable without being overly repetitive. I applaud the fact that this is a standalone game and not DLC for Infamous 2, allowing as many people as possible to play it. As a light snack between other, bigger end-of-year releases, this is a fun little adventure for a great price.

Infamous: Festival of Blood is a great addition to your collection if you’ve got an itching for a short but enjoyable adventure. What it lacks in length it makes up for in fun. And unlike some full games, it doesn’t pad itself out and get boring. At this price, it’s hard to complain about something so great.

The most significant alteration to the control scheme is “tactical defending” — it’s optional in single player, but mandatory online. Tactical defending forces more manual control over defenders, and while implementation is simple enough (the game starts off with a tutorial explaining how it works), it’ll certainly change the play style of seasoned veterans. It also shifts the balance to being more attack-heavy than ever before (more on this later).