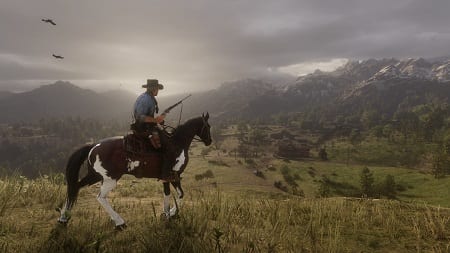 Yep, that about sums it up…

It’s hard to overstate how excited we’ve been for Red Dead Redemption II. While we’re big fans of Rockstar’s signature franchise, Grand Theft Auto, we’ve always found driving the least enjoyable part. So for us, RDR took pretty everything we loved about GTA, removed the weakest element, and created an incredible world. The sequel promised to be bigger and better. It’s time to saddle up and find out.

There’s a certain level of awkwardness to RDR2‘s controls. Your character, Arthur Morgan, isn’t some highly trained operative or martial arts expert. He’s an outlaw and a brute, and there’s a weight to his movement. It’s mostly fine, though there are times when the cover mechanic doesn’t work as well as we’d like. Shooting retains the tiny reticule from the original, making auto-aim and Dead Eye the way to go in firefights.

Much of your time will be spent on horseback, which feels really good. Yes, there are instances when your horse might get spooked or not perfectly execute what you had in mind, but they’re not cars so expecting them to always respond as you want flies in the face of the game’s realism. There’s a number of secondary activities to take part in, most of which handle well enough, though we’re not big fans of hand-to-hand fighting. It always feels unwieldy.

Running on the PS4 Pro, Red Dead Redemption II is a sight to behold. The world is immaculately constructed with layer upon layer of detail worked in. It’s tough to accurately describe how good it is, where quietly riding through the wilderness, just observing the scenery and wildlife is a viable way to spend your time. Characters, towns, mountains, forests, swamps and so on, it’s the new gold standard for gaming open worlds.

In addition to its beauty, RDR2 also turns the dial to 11 on animations, not just in quality, but in quantity as well. It seems like nothing is assumed, and where most games wouldn’t bother with actually animating an action RDR2 goes all out. Just watch Arthur rifle through the pockets of a body to loot it, duck away from foliage infringing on his space or brutally skin a kill (and maybe even cut off its horns). Rockstar took no shortcuts here.

Excellent voice acting has long been a hallmark of Rockstar’s games, and the tradition continues here with a strong and diverse cast that delivers from start to finish. Their performances are critical in helping you invest in the story and the characters. The soundtrack is great as well, but the game’s willingness to let quiet, ambient sound carry huge chunks of time is equally endearing.

Set roughly a decade before the original, Red Dead Redemption II casts you as Arthur Morgan, the primary enforcer of Dutch Van der Linde‘s gang, which includes a young John Marston, RDR‘s protagonist. We initially find the gang on the run following a botched heist in the town of Blackwater, forcing them to abandon all their money and head into the mountains to escape.

Eventually things calm down a little, and the focus shifts to making a home and earning enough money to escape the law and settle down permanently. It’s a dream that Dutch sells to the gang, though as time goes on it’s met by more and more skepticism from Arthur. While those are the broad strokes, rest assured that RDR2 contains a deep, character-driven story and is one of the better narratives we’ve encountered in a video game.

Within the confines of the story you’ll be sent out on dozens of missions with varying goals, usually alongside one or more of your fellow gang members. Outside of some early stuff that serves as glorified tutorials, the action typically involves gunning down your enemies. Despite that, however, you’d never consider this to be a shooting game because there’s so much more going on in the world around you at all times.

Nowhere is that more true than in the gang’s camp. Here you’ll interact with other members, go out on character-specific excursions (robbing houses, fishing, collecting debts, etc.) and use your hard-earned dollars to supply and upgrade the camp. It’s a pretty cool mechanic, especially early on when money is particularly tight and it falls to you to go hunting and thieving to keep morale up.

It’s worth mentioning that those early moments are quite slow, allowing you to familiarize yourself with the game’s mechanics and also drink in the world. For those that appreciate a slow, methodical build, it should be enjoyable. Conversely, those that prefer to jump right into the action may find it cumbersome. We definitely fall into the former camp, and truly enjoyed the sense of isolation and calm the game often delivers.

In fact, it’s all those little moments that help make RDR2 so special. Happening upon a couple of thieves trying to crack a safe and relieving them of their trouble, surviving a bushwhacking, helping someone trapped under their horse, hunting an animal then cooking it at a campfire you set up in the wild. There’s so much minutia packed into it that there are times it feels almost like a cowboy simulator more than a game (and we mean that in a good way).

Rockstar’s world judges your version of Arthur as well, based on his deeds as well as his appearance. Help folks, stay clean cut and bathe regularly and you’ll be well received. Do dastardly things and wallow in your own filth and don’t expect townsfolk to welcome you. It’s just another way of drawing you in and asking you to stay a spell.

It’d be sheer folly to try to lay out everything you can do in Red Dead Redemption II, such is the scope of Rockstar’s open-world masterpiece, but the critical elements are its flawless construction, well-developed characters and excellent storytelling. It’s simply one of the best games we’ve played.

By HC Green
Tags: Grand Theft Auto, Red Dead Redemption II, Rockstar, Video Game Review
This entry was posted on Monday, November 5th, 2018 at 7:33 pm and is filed under Herija Green, Video Game Reviews. You can follow any responses to this entry through the RSS 2.0 feed. Both comments and pings are currently closed.