Video Game Review: We should talk. 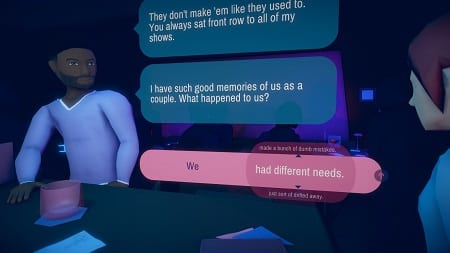 We definitely had different needs.

Presented to us as “a narrative game that simulates the nuances of conversation in relationships,” We should talk. casts you as a nameless female during a night spent hanging out at a bar. The story revolves around your relationship with your girlfriend Samantha, who texts you from home throughout the evening. It seemed like an interesting enough premise. Time to see how well it executes its idea.

Initially, things work pretty well despite the underwhelming graphics and repetitive sounds as you piece together your responses by cycling through various choices. It’s a smart approach that allows you to subtly change how you say, in some cases, essentially the same thing, rather than just flicking through a few static options.

As we went through the game for the first time we were curious to see how different responses would change future trips through the experience. And then the credits rolled after roughly 15 minutes. Yes, we knew it was a short-form game in which the longevity was built around playing through multiple times and exploring its nine different endings, but when it’s that abbreviated there’s only so much depth and emotion to be generated.

Each playthrough is structured the same. You open with a brief exchange with Stephanie, the bartender, and then Round 1 of texting with Sam. That’s followed by either a brief conversation with your ex-boyfriend Dante or Jimmy, who mistakes you for someone he’s supposed to meet from a dating app. After that you get a second text burst with Sam, then Dante or Jimmy (whoever you didn’t talk to the first time), and then the finale with Sam. That’s it.

Within that, only the Sam sections feature any meaningful choice. The conversations with Steph, Dante and Jimmy include only a handful of exchanges, and yet from changes within those you get changes in the outcome. The problem is that those outcomes don’t feel earned. One ending has you have an affair with Dante, but we reached it after trading nothing beyond a few mundane pleasantries. You can get explicit with Dante, so the ending seemed like it should exist, but there’s no way it should’ve been triggered.

It ultimately reminded us of TellTale’s first season of The Walking Dead in which the claim was that the story was tailored to the player. In reality, however, there were few meaningful choices, and even those didn’t change things significantly.

Probably the best aspect of We should talk. is the writing. Despite never appearing in the game, Samantha feels like a real person with a fleshed out background about her tough childhood and lack of parental acceptance, an emotionally difficult profession and a powerful need for her better half to be with her. It shows the game’s potential, even if it never fully reaches it.

While we can appreciate brevity, We should talk. is too short to accomplish what it sets out to. Only your interactions with Sam have any meat on the bone with the other three characters feeling like throwaways that exist only to create space between conversations with Sam and then ham-handedly appear in the game’s nine endings.