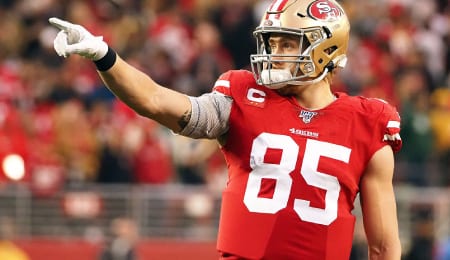 George Kittle is set to explode this season. (Niners Wire)

We’re back with another dose of the 2020 RotoRob NFL Draft Kit, so while you wonder who will win this year’s Super Bowl — the odds from the bookies have the Chiefs as the favourites — let’s review the top 20 tight ends.

This is a year of change, and the Fantasy football world is no different. The forefront of tight ends features a changing of the guard, the re-emergence of Rob Gronkowski and other up-and-coming names (like Jonnu Smith). This year’s tight end crop has more talent and opportunity than ever. Outside of the top four tight ends (who stand above the pack), we believe the draft capital is better spent on securing workhorse backs or upside receivers, as it’ll be fairly easy to get a quality tight end later in the draft.

We’ve developed our TE rankings based on expected targets/target share as well as the stability and effectiveness of the offense as a whole. Without further ado, here’s a list of our top 20 for 2020 (there’s a certain symmetry in saying that out loud, isn’t there?).

1. George Kittle, San Francisco 49ers: Despite being held to 14 games last year, Kittle led the league in touchdowns called back due to penalties (three). Playing on a broken ankle didn’t help either as his yards per reception (12.4) took a step back from the 15.6 he recorded in 2018. Throw in the fact that @ProFootballDoc suggests WR Deebo Samuels will start the year on the PUP list and Kittle’s upside is at an all-time high. Expect 90 targets, 1,224 yards and seven touchdowns from Kittle, who really knows how to escape coverage (see video below).

2. Travis Kelce, Kansas City Chiefs: Commanding a 24 per cent target share (second only to Kittle’s 28 per cent), Kelce is the safest tight end in Fantasy this year. Although Kelce’s role within the offense is cemented, Kansas City is likely to suffer from “too many mouths to feed” syndrome. With the Chiefs having less need to throw from behind, we project Kelce to finish with 92 receptions on 136 targets, 1,180 yards and six touchdowns.

3. Mark Andrews, Baltimore Ravens: One of five tight ends with over 20 per cent target share in 2019, Andrews finished as Fantasy’s ninth-ranked tight end thanks to an inflated touchdown rate (15 per cent). Averaging 6.5 targets, he put up a monstrous 13.3 yards per reception rate, second only to Jared Cook (16.4) among tight ends. Andrews is a prime candidate for regression, but we expect him to produce a line of 68 catches on 96 receptions for 850 yards and eight touchdowns.

4. Zach Ertz, Philadelphia Eagles: Between them, Ertz and Dallas Goedert shouldered a staggering 40 per cent target share in 2019. On 222 targets, the boys hauled in 146 receptions, 1,523 yards and 11 touchdowns. The Eagles are unlikely to continue featuring two tight ends as the receiving corps continues to get healthy. Ertz is our favourite premium tight end and we expect him to finish with 98 receptions on 149 targets for 960 yards and five touchdowns. Handcuff Ertz with Goedert.

5. Rob Gronkowski, Tampa Bay Buccaneers: “Gronk and Tom Brady sitting in a tree… S-C-O-R-I-N-G.” Truthfully, Tampa Bay will ask Gronk to block more often than expected, thereby limiting his upside. He will do the most damage in the red zone. Projected to receive a 19 per cent target share of Brady’s estimated 560 targets, Gronk will produce a ball park line of 68 receptions on 102 targets for 675 yards and 12 touchdowns. Expect Chris Godwin to nibble into Gronk’s targets.

6. Darren Waller, Las Vegas Raiders: The reformed Waller carried the burden of the Raiders’ passing attack on his shoulders. Commanding a 21 per cent target share, he will look to build on his 2019 campaign as the offense added speedy burner Henry Rugs III on the perimeter. Unlike a lot of other TE options, based on his poor touchdown luck last year, Waller should experience an uptick in scoring this season. Given how awful the Raiders’ defense is, he’s also set to feast in garbage time. Waller should produce around 71 receptions on 95 targets for 764 yards and five touchdowns.

7. Hunter Henry, Los Angeles Chargers: Playing on the slowest offense in the league will cap Henry’s upside. Philip Rivers is out, Tyrod Taylor and Justin Herbert are in. Through 12 games, Henry produced 55 receptions on 76 targets for 652 yards and five touchdowns. Projecting for 2020, he should finish with 75 receptions for 825 yards and four touchdowns. The Chargers are in disarray.

8. Tyler Higbee, Los Angeles Rams: After Week Nine, Head Coach Sean McVay made a shift towards the 12 formation instead of leaning on the 11 formation, thereby opening the door to Higbee’s emergence as a star tight end. Over the last six games, Higbee averaged eight receptions on 10 targets while totaling 542 yards and two touchdowns. We expect him to be the 1C to Cooper Kupp‘s and Robert Woods’ 1A/1B receiving threat.

9. Jonnu Smith, Tennessee Titans: In Head Coach Mike Vrabel’s first two years, the offense distributed 49 per cent of the passes to tight ends including Smith, Delanie Walker, Anthony Firkser, MyCole Pruitt and Jacob Hollister. The departure of Walker frees up 18 per cent target share, likely to be completely distributed to Smith. We expect Smith to produce 65 receptions on 99 targets for 788 yards and five touchdowns.

11. Jack Doyle, Indianapolis Colts: Frank Reich, the architect behind the 2018 Eagles’ run, always had an affinity for the tight end position. He masterminded Ertz’s career year with the use of RPOs. Fast forward to today, and the Colts have never distributed less than 30 per cent target share to the leading two tight ends under Reich. Doyle’s athleticism and superior upside should earn him a larger role.

12. Noah Fant, Denver Broncos: Starting just 11 games in 2019, Noah racked up 10 receptions on 14 targets for 188 yards and one touchdown during his stint with Drew Lock. Projected for a “big year,” Fant will be cucked by rookie receiver Jerry Jeudy and Courtland Sutton. But there is room for optimism as the Broncos ranked almost dead last in every relevant passing category under Joe Flacco. The offense will improve under Lock.

13. Jared Cook, New Orleans Saints: Like Michael Thomas and Alvin Kamara, Cook may be subject to having targets stolen by Emmanuel Sanders, and this has to concern Fantasy owners. Commanding a minuscule 13 per cent target share, Cook’s value was completely buoyed by his nine touchdowns in 2019. Averaging just 3.1 receptions per game, he enjoyed his highest yards per reception mark (10.8) and highest touchdown rate in (20 per cent) his career. Red flag!

14. Mike Gesicki, Miami Dolphins: Miami offers the cheapest sneakily good options in this year’s Fantasy landscape. Gesicki, experienced in the slot, snagged 51 passes for 570 yards and five touchdowns last year. Gesicki marked an Average Depth of Target (ADoT) of 10.2, a rare milestone to hit (he was one of just four TEs in to do so last season). Tua Tagovailoa has experience with RPOs (51 per cent of all snaps in 2018) and dumping off to the hot receiver in high pressure situations.

15. Dallas Goedert, Philadelphia Eagles: As mentioned above, given that both Ertz and several of the team’s receivers were hurt, the likelihood of Goedert repeating his 2019 performance is impossible. For instance, in Alshon Jeffrey‘s seven-game absence, Goedert averaged 4.4 receptions on seven targets, 45 yards and 0.28 touchdowns. Goedert should be a priority for Ertz owners.

16. Austin Hooper, Cleveland Browns: Hooper will play a role in Head Coach Kevin Stefanski‘s offense, but don’t expect him to produce remotely close to what he did in 2019.

17. Tyler Eifert, Cincinnati Bengals: The Bengals are likely to run a lot of 10 formation to take advantage of their receiving talent. Despite that, Eifert should still be on the field a lot — especially in the red zone.

19. Jimmy Graham, Chicago Bears: As mentioned recently, the Bears are looking to run an offense similar to the Eagles.

20. Kyle Rudolph, Minnesota Vikings: Tight ends have always survived under OC Gary Kubiak’s 1-1-1 offense (i.e., featuring one back, one receiver, and one tight end — sounds like a George Thorogood tune, doesn’t it?).

Now it’s your turn. Let us know in the comments below who you think is too high, too low or missing from our rankings.

By Lucas Chan
Tags: 2020 NFL Draft Kit, Tight End Rankings
This entry was posted on Saturday, June 27th, 2020 at 12:13 pm and is filed under 2020 NFL Draft Kit, Cheat sheets, FOOTBALL, Lucas Chan. You can follow any responses to this entry through the RSS 2.0 feed. Both comments and pings are currently closed.