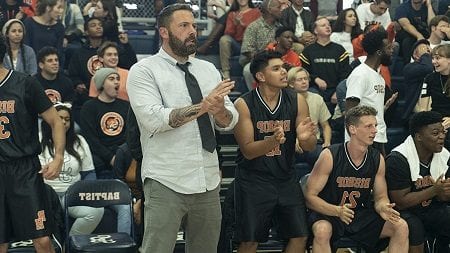 Expletives! Lots and lots of expletives!

One of the last theatrical releases before the world turned upside down, The Way Back stars Ben Affleck and reunites him with director Gavin O’Connor after the duo teamed up for 2016’s The Accountant. As big-time sports fans, we’ve always been tough on movies based on sports for how inauthentic the action often feels, so we fired up The Way Back with our guard up. As it turns out, it features some of the more realistic sports sequences we’ve seen.

In mourning following the death of his young son, Jack Cunningham (Affleck) has retreated into a pattern of going to work at a construction site and getting plastered, starting his day with a beer in the shower, sneaking hard liquor on the job and heading out to the bar afterwards. He gets a call out of the blue from Bishop Hayes, the high school he starred at in basketball, with an offer to make him the new coach.

While he originally plans to turn it down, Jack decides to accept and takes over a one-win team full of dysfunction and modest talent. After some growing pains, he and assistant coach Dan (Al Madrigal) find a formula that works, and his outmatched squad starts to string together some wins behind talented point guard Brandon Durrett (Brandon Wilson). That success leads to strides in his personal life as well, though news that his wife Angela (Janina Gavankar) has met someone during their separation hits him hard.

As he struggles with that, some family friends are dealing with the same medical problems with their son that Jack and Angela had to endure. When that situation takes a turn for the worse, Jack can’t cope and plunges back into the bottle, creating new problems in both his personal and professional life that he’ll need to overcome.

Affleck doesn’t always connect with us in his leading roles, but he’s locked in here. While The Way Back features a lot of basketball, it’s far more about coping with loss and returning to a sense of normalcy in the wake of tragedy. Affleck’s dependency feels authentic. He has good and bad days, but it never feels cartoonish or contrived — we were waiting for him to be drunk at a game and stagger onto the court, which thankfully never happened. Affleck really delivers here, and his performance is central to the film’s emotional success.

As noted, the basketball sections are well done. Players seem age appropriate, and nobody looks out of place on the court. Strategies and coaching advice makes sense, and Jack’s struggles to adapt to the morals of a Catholic school generate much of the film’s levity. It also helps that Jack is never portrayed as a saviour. He’s a flawed man that’s passionate about basketball, and the toughness he instills helps elevate his team.

There aren’t any big names outside of Affleck, but all of the key secondary players deliver when given the chance, particularly Madrigal as the assistant coach, Wilson as the star player and Gavankar as Affleck’s estranged wife. Melvin Gregg also does a nice job as Marcus, who is initially kicked off the team before returning. It feels like there could’ve been more of an arc with him, but he’s relegated to the background for most of the second half.

The Way Back offers up a few wrinkles and steers clear of some tropes, but it still feels like a generally predictable redemption story. You have a bad team, full of screw ups, the new coach comes in, whips them into shape and they start winning en route to a rematch with the team that really roughed them up before. That’s the sports side. It’s similarly cliched on the personal side with Affleck’s performance elevating what is a pretty standard arc.

There are two extras totaling just over 10 minutes, one of which focuses on the basketball aspect of the film while the other discusses the more personal side of things. Both are fine, but you’re not going to take away much from either of them.

The Way Back was a pleasant surprise with enough of a sports slant to sate hoops fans and human interest angles to hook regular movie goers.

By HC Green
Tags: Ben Affleck, Blu-ray reviews, Movie Review, The Way Back
This entry was posted on Friday, June 5th, 2020 at 8:05 pm and is filed under Herija Green, Movie Reviews. You can follow any responses to this entry through the RSS 2.0 feed. You can skip to the end and leave a response. Pinging is currently not allowed.