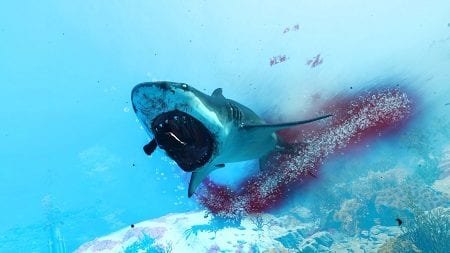 Farewell and adieu to you fair Spanish ladies…

For as undeniably awesome (and terrifying) as sharks are, they are criminally underrepresented in the world of gaming, typically banished to the background as vague threats or collectable targets. Killing Floor developer Tripwire Interactive aims to change all of that with Maneater, an action RPG that allows you to terrorize the deep (and the surface) as a remorseless eating machine.

Operating underwater in games can be tricky, and Maneater actually does a pretty good job of nailing the basics in terms of movement, acceleration and eating. The lock-on targeting doesn’t work all that well, though, making the actual battles feel more like a desperate attempt to chomp a moving target than anything precise.

That could’ve been a big deal, but for the vast majority of the game your shark will be stronger than any would-be predators. Even if you do get in trouble, said predators lack persistence, meaning you can swim away to create distance, eat some passive fish to heal up and then go back for Round 2. For better or worse, this is definitely not a challenging game — in fact, we died only once in 10-plus hours leading to the final boss.

Despite its simplicity and relative lack of difficulty, Maneater remains fun to play. There’s something almost soothing about just swimming around and eating stuff. It is better in shorter bursts, though, as lengthier sessions noticeably reduced the enjoyment. To put it another, more topical way, Maneater is best enjoyed in smaller bites.

Visually, things teeter on the verge of feeling last-gen. Everything animates well enough, but there isn’t a lot of variety in terms of fish, boats or humans, all of which recycle liberally from start to finish. The regional alpha predators will get a unique twist to differentiate them from run-of-the-mill fish of the same type, but that’s about it. There’s a murky quality to the water as well, which doesn’t look as realistic as many games despite being a central feature.

On the audio side, SNL alum Chris Parnell serves as the narrator, offering up a bevy of snarky feedback as you move through the world. While it adds some humour, it’s in stark contrast to the actual storyline of shark-maming psychopath Scaly Pete, which comes off pretty bizarre. Neither the soundtrack nor effects leave any kind of lasting impression.

Maneater tells its story via a series of clips from a pseudo-reality series starring Scaly Pete, starting when he kills a pregnant bull shark and then “brands” the baby (that’s you) before having his own hand bitten off. As you progress through the world and grow you’ll see short scenes updating you on Pete’s activities. It feels like perhaps it was supposed to be dark humour. It isn’t funny, though, creating an odd disconnect between it and Parnell’s narration.

Then again, the story makes up a very small part of the experience. In reality, the game is all about being a bad-ass shark, and in that capacity it’s mostly successful. Each new area you enter is loaded with stuff to find and various quests, and each time you finish a mission or consume a fish you bank the nutrients needed to evolve your shark into an ever-deadlier killing machine.

There’s little variety to those activities, though, as each successive area follows a pretty strict playbook. Missions almost always consist of eating X number of a certain fish or humans, and you’re always looking for one of three collectible types: locations, license plates and nutrient caches. Stronger predator fish and boats will also show up to be taken down. Do enough of these and the region’s “alpha” will appear. Kill it and you’re on to the next area. Rinse and repeat.

Even though the method of advancement isn’t all that compelling, growing your shark and unlocking (and then leveling) mutations got its hooks in us. As you’d suspect, some of the mutations come via natural progression, whereas others are unlocked through collectables and raising your infamy level — this is done by eating humans until shark hunters show up, then causing enough havoc until a sub boss arrives. Defeat them and your level goes up along with a new mutation to equip.

Despite the fun we had with the game, Maneater is lacking in some departments, and perhaps the biggest shortfall comes in the A.I. It’s not good. Predators will always attack you, even if they’re a Level 1 muskie and you’re a Level 30 shark (there’s a mutation you can equip to stop it, but that shouldn’t be necessary). Those same predators will also give up pursuit, even if they’ve nearly killed you, allowing you to feast on smaller fish to heal up.

One other thing that also stood out: nothing interacts with anything besides you. Mako and hammerhead sharks will swim right alongside a bunch of seals… and do nothing. Fishing boats won’t try to catch other fish. Everything in the world is just waiting for you to engage, and that really makes things feel sterile and artificial.

Maneater has its share of shortcomings, but its core concept is refreshing enough to create a fun experience from beginning to end.

By HC Green
Tags: Killing Floor, Maneater, Video Game Review
This entry was posted on Thursday, June 4th, 2020 at 2:12 pm and is filed under Herija Green, Video Game Reviews. You can follow any responses to this entry through the RSS 2.0 feed. Both comments and pings are currently closed.