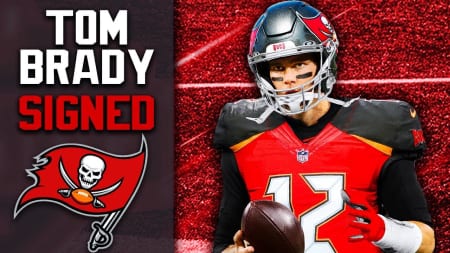 Can Tom Brady extend his legacy in Tampa Bay? (Medium)

Quarterback is, once again, the deepest position in Fantasy football. The annual tradition of uncovering a diamond in the rough, overdrafting high-end quarterbacks or speculating which sophomore pivot has the chops to take the next step has officially begun. We answer key questions like: Can Brady emulate Peyton Manning‘s 2013 season with the Broncos? Does Carson Wentz have enough ACL left to complete a season? Will Pete Carroll ever stop coaching scared after his 2013 Super Bowl loss to the Patriots?

Without further ado, let’s look at the top quarterbacks in Fantasy football for 2020.

1. Lamar Jackson, Baltimore Ravens: After rushing for 1,206 yards and seven touchdowns in 2019, the reigning MVP will be hard pressed to repeat his ground assault following the retirement of future Hall of Fame guard Marshal Yanda. Jackson’s value derives from having the highest floor (buoyed by his rushing line) while simultaneously having the second highest ceiling of any quarterback (only exceeded by Patrick Mahomes). With a healthy Marquise Brown and Mark Andrews as the only viable downfield catchers, Jackson will have always have the option of dumping the ball off to his backs or taking it himself. It must be noted many rushing quarterbacks break down during their second full season, so draft him at your own peril. Still, Jackson is crazy good — in both the real and virtual worlds (see video below, where he literally runs through and around the entire defense).

2. Patrick Mahomes, Kansas City Chiefs: The Super Bowl MVP is entering the fourth year of five-year contract. With all the offensive weapons returning for another championship run, Mahomes is the favourite to win the MVP award (+350). Maintaining 66 per cent accuracy on 8.3 yards per attempt and throwing an average of 2.5 touchdowns per game, he shows no signs of slowing down. With all five linemen back for 2020, Mahomes and Edward Clyde-Helaire are going to do some real damage.

3. Deshaun Watson, Houston Texans: Watson finished another unremarkable year under Heach Coach and GM Bill O’Brien with a throwing line of 495-3,852-26 and a dozen interceptions to boot. Watson’s Fantasy season was buoyed by his rushing line of 82-413-7. We expect him to be a more efficient passer while experiencing touchdown regressions on the ground. Losing DeAndre Hopkins was bad but opting not to prioritize protection for your franchise quarterback is worse. This atrocious O-line rank 27th in pass protection and 21st in run protection. Watson will be running and gunning for his life and be asked to bail out a terrible defense.

4. Dak Prescott, Dallas Cowboys: For much of the 2019 season, one of Fantasy’s best quarterbacks resided in Dallas. Throwing for 4,902 yards with 30 touchdowns and 11 interceptions, Prescott set career highs in yards per attempt, total yards and touchdowns passes. With the departure of lame duck Jason Garrett, newly inaugurated Head Coach Mike McCarthy repeatedly stressed quarterback autonomy. Look forward to an offense similar to the 2018 Rams: outside zone runs, play action, 11 personnel. The Cowboys’ offense will run through Prescott for the first time in his career.

5. Kyler Murray, Arizona Cardinals: Murray crushed a lot of expectations in his first season with the Cardinals, throwing for 349-3,722-20 and 12 interceptions. Head Coach Kliff Kingsbury‘s offense favours quarterback as the centrepiece and distributes touches evenly. With the addition of veteran receiver Hopkins and draft steal OL Josh Jones, Arizona has an incredibly potent offense. Moreover, Murray rushed for 544 yards on 93 carries with four touchdowns. If he takes the sophomore step forward, he has the potential to supplant even Jackson and Mahomes.

6. Russell Wilson, Seattle Seahawks: Wilson surpassed expectations last year, finishing as the fourth-ranked Fantasy QB. Much of his damage was done in the fourth quarter when Carroll routinely asked his quarterback to bail the team out. Working on elite efficiency, Wilson attempted the same amount of passes as Derek Carr and Mitchell Trubisky. Wilson was balling, throwing for 516-4,110-31 with only five interceptions, while rushing for 75-342-3. Owners can expect his floor to remain solid with touchdown upside. Complimented by a terrible defense in a shootout division, Wilson will feast.

7. Matt Ryan, Atlanta Falcons: After finishing as Fantasy’s QB11, Ryan again disappointed owners based on his ADP, a habit he seemingly does every year. There are huge question marks surrounding Todd Gurley and the unproven offensive line. We argue that this is a great thing. In a shootout division with a terrible defense and possibly a gimped run game, Ryan can make his living on garbage time alone. Last season, he seemed more comfortable trailing (362-2,569-15, 68 per cent completion rate, 93.6 passer rating) than he is leading (147-1,067-5, 60.54 per cent completion rate, 77.1 passer rating).

8. Tom Brady, Tampa Bay Buccaneers: There’s no denying Brady is over the hump and his stats last season showed it. His completion percentage is the lowest since 2013 and worse yet, his yards per attempt dipped to 6.6 in contrast to his 7.5 career mark. Despite the numerous red flags, we believe Brady’s debut in Tampa Bay will be 2013 Peyton-esque. Brady will be buoyed by the return of Rob Gronkowski, and Head Coach Bruce Arians and the Bucs organization has rallied around the veteran quarterback, adding incredibly polished OT Tristan Wirfs. We think Brady has the mental and physical dexterity to push towards a 5,000/50 season — especially given how pass-funnel Tampa Bay’s defense is, forcing teams to throw against the Bucs and providing garbage time for him to rack up numbers.

9. Carson Wentz, Philadelphia Eagles: Throwing for 607-4,039-27 and seven interceptions while rushing for 62-243-1 made Wentz the ninth most valuable Fantasy QB last year. Severely hampered by the lack of fast receivers on the edge, the Eagles organization aggressively drafted Jalen Reagor as insurance to the injury prone DeSean Jackson and Alshon Jeffrey. There’s no sugar coating Wentz’s down year (career lows in touchdown percentage and yards per attempt, and lowest passer rating since his rookie season), yet he was still a top 10 QB. He’s slated for another top 10 performance so should not be lower than the 10th QB off the board.

10. Aaron Rodgers, Green Bay Packers: Do you believe in Rodgers’ revenge tour? Bill Walsh was a mastermind at orchestrating constructive tension. Pitting Steve Young against Joe Montana pushed the latter to three subsequent Super Bowls. Jordan Love is Rodgers’ Young. Rodgers shows no signs of statistical weakness, throwing for 569-4,002-26 with just four interceptions and a passer rating of 95.4. Capped by Head Coach Matt LaFleur’s run dominant offense, Rodgers had his most efficient season, outsourcing his redzone touchdowns to Aaron Jones and maintaining his 7.0+ yards per attempt average. Rodgers has three years left with the franchise before he turns 40. Look for him to sling the pigskin with more reckless abandon this year.

British rock band Queen had one hell of a career with its classic lineup (Freddie Mercury, Brian May, Roger Taylor and John Deacon). In 1978, it released its seventh album, Jazz, which contained the Deacon-penned melancholy number “In Only Seven Days.”

Now it’s your turn. Let us know in the comments below who’s missing, who’s too high or who’s too low and why you agree or not.

By Lucas Chan
Tags: 2020 NFL Draft Kit
This entry was posted on Saturday, May 30th, 2020 at 4:32 pm and is filed under 2020 NFL Draft Kit, Cheat sheets, FOOTBALL, Lucas Chan. You can follow any responses to this entry through the RSS 2.0 feed. Both comments and pings are currently closed.