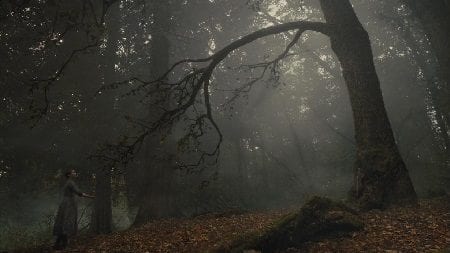 There are silhouette shots aplenty in Gretel & Hansel.

Originally written by The Grimm Brothers in the 1800s, Hansel and Gretel is among the more famous folk stories in history. As such, it’s been adapted to film many times in many ways, including the underrated Witch Hunters version with Jeremy Renner and Gemma Arterton putting an action spin on things. Now we’re getting a more faithful rendering with Gretel  & Hansel, a horror film from director Oz Perkins, who is best known for the unsettling The Blackcoat’s Daughter.

Following the death of their father, Gretel (Sophia Lillis; IT) and her younger brother Hansel (Sam Leakey) are kicked out of their home by their grief-stricken mother. After a chance encounter with a hunter who saves them from a madman, the children are given directions to reach a place that will take them in and teach them skills.

Along the way hunger drives them to eat mushrooms that turn out to be hallucinogenic, and when they regain their senses they find themselves at a strange house with the smell of delicious food coming from within. The two soon meet Holda (Alice Krige), a strange old woman that welcomes them into her home, feeding them and providing them a place to rest in exchange for housework being done.

Atmospheric dread is the name of the game in Gretel & Hansel, peppering the audience with lots of unsettling imagery. There are some jump scares (that scream!!!), but the movie generally takes a “less is more” approach, letting tension build and your mind fill in the blanks. It’s effective here, even if the film overdoes the whole “mysterious figures lingering in the background” silhouette shot.

Between this and her work in IT, Lillis is now a proven commodity for a girl in horror movies. She does a good job of threading the needle between being vulnerable and competent, and the interplay between her and Krige, who manages to be “off” without being outright menacing as part of a strong performance, is well done. In a film with very few characters, Lillis and Krige do all they can with what they’re given.

As mentioned, there are too many shots of random, unexplained silhouettes milling about in the woods, which speaks to an underlying issue: a lot of the time in Gretel & Hansel nothing is happening. In fact, even at less than 90 minutes the movie feels stretched. Yes, it generates a strong sense of foreboding, but after spending most of the film building that up, the payoff isn’t satisfying.

There’s nothing inherently wrong with making a non-traditional horror movie. The problem here is that eventually the constant dread has a numbing effect, and the effectiveness of the “less is more” technique wears off. We didn’t need monsters popping out every five minutes or everything ending in an elaborately choreographed fight scene, but we would’ve at least liked a little more conflict. Unfortunately, as it stands, the world building gives way to boredom.

There’s only one extra to be found, a five-minute animated “storybook” of the movie you just watched. You may notice some slight differences, such as Hansel being present in places he wasn’t in the film, but it’s nothing of particular interest.

Gretel & Hansel is well acted and contains a haunting beauty to its world, but the slow build of dread never pays off and makes for a sometimes tedious watch.

By Herija Green
Tags: Blu-ray reviews, Gretel & Hansel, Movie Review, Sophia Lillis
This entry was posted on Saturday, May 16th, 2020 at 4:05 pm and is filed under Herija Green, Movie Reviews. You can follow any responses to this entry through the RSS 2.0 feed. You can leave a response, or trackback from your own site.