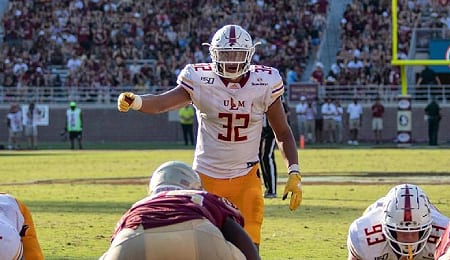 Chase Day should get attention as an undrafted free agent.

Covid-19 has had an impact on nearly every aspect of the sporting world, but perhaps nowhere more than with prospects and their ability to be properly scouted for the various drafts. NFL linebacker prospect Chase Day is a perfect example of a player whose draft status was negatively affected by the pandemic.

In having his Pro Day cancelled, the Louisiana-Monroe fifth year senior missed a golden opportunity to show NFL scouts what he can do. And this was only exacerbated by the fact that he wasn’t invited to the NFL Combine. So when Day ran a 4.48 40-year dash (see video below) — a time that would have ranked third among the over 40 linebackers that participated in the Combine — it flew under the radar, and he went undrafted as a result.

RotoRob recently chatted with Day about this experience, his college career, his aspirations to make the NFL as an undrafted free agent and his limited exposure to Fantasy football.

To hear the interview in its entirely, simply click the pointy arrow button below!

Songwriter Annie Lennox has been churning out music since 1976 and is still going strong today. In 1992, she embarked on a solo career, releasing Diva. From this effort, the third single was “Walking on Broken Glass.”

Now it’s your turn. Let us know in the comments below where you think Day might wind up.

By RotoRob
Tags: Chase Day
This entry was posted on Monday, May 4th, 2020 at 1:31 pm and is filed under FOOTBALL, Interview, RotoRob. You can follow any responses to this entry through the RSS 2.0 feed. Both comments and pings are currently closed.