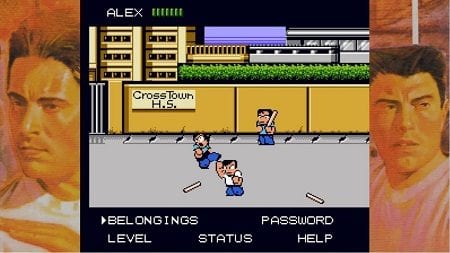 As a general rule of thumb, one of the most difficult things to review is a collection of games, especially when you’re talking about titles from generations ago. Such was the task with Strangely Compelling’s Double Dragon & Kunio-kun Retro Brawler Bundle, which offers up 18 games from the 1980s and ’90s, many of which never saw a North American release. We’ll be checking out the Nintendo Switch version, but the game is also available on the PlayStation 4.

That leaves 11 games to make their Western debut, all of which are part of the Kunio-kun series that the non-Double Dragon titles fall under. It’s actually a pretty interesting assortment of games, including unique takes on soccer, hockey and basketball, but we’re still talking about 30-plus-year-old releases, and minus any nostalgic elements we found none of them really held our attention for too long. What still held up for us, however, was River City Ransom.

Its mix of side-scrolling brawling, comical graphics and light RPG elements seemed wholly unique when it first hit the NES in 1989, and it was still a lot of fun to take Alex and/or Ryan through the mean streets of River City. There’s just something endearing about swinging a pipe roughly 20 times in a second and watching your defeated foe blink into nothingness while “BARF!!!” appears along the bottom of the screen.

Many of the games include a “quality up” version alongside the original, which smooths out some of the rough edges, giving the games a cleaner appearance and addressing balancing issues. Unless you’re a die-hard traditionalist we’d recommend playing the former as it does make a noticeable difference.

There are also some quality-of-life improvements as seen on the NES/SNES virtual consoles on the Switch in which you can save your game at any point, bringing some modern-day flexibility to progression.

Double Dragon & Kunio-kun Retro Brawler Bundle is a solid collection, offering up 18 titles, albeit for a sizable price given their age. If you’re a big fan of River City Ransom and/or the Double Dragon series, this should be a worthwhile investment as it gives you the classics with a number of similar games from the same time period.

By Herija Green
Tags: Double Dragon, Double Dragon & Kunio-kun Retro Brawler Bundle, River City Ransom, Video Game Review
This entry was posted on Thursday, February 27th, 2020 at 4:44 pm and is filed under Herija Green, Video Game Reviews. You can follow any responses to this entry through the RSS 2.0 feed. You can skip to the end and leave a response. Pinging is currently not allowed.