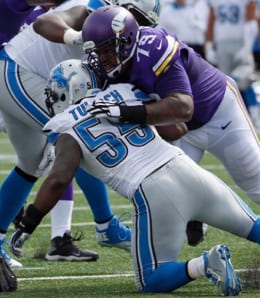 RotoRob recently had an opportunity to sit down and chat with former NFL offensive lineman Mike Harris, who — after being a four-year starter at UCLA — signed with the Chargers as an undrafted free agent in 2012. After two years in San Diego, he played his final two seasons for the Vikings, yet remains a popular figure in the community (as you can see in the video below).

Next month, he’ll be participating in some pheasant hunts at Granite Springs Lodge in South Dakota. Several NFL alumni will partner up with seasoned hunters to shoot birds — for charity! All the proceeds generated by these hunts will be donated to the local United Way to help residents and businesses that were affected by floods earlier this fall.

Among the topics Mike and RotoRob covered were:

Mike’s an interesting guy with some admirable goals. You can hear our entire conversation here:

Bruce Springsteen wowed critics at the beginning of his career in the early-’70s. Since then, his legend has grown, and in 2002, he released his 12th studio album, The Rising. From this effort comes “Further On (Up the Road),” which was originally played live at Madison Square Garden in 2000.

Now it’s your turn. Let us know in the comments below what your favourite memory of Harris’ career is.

By RotoRob
Tags: Mike Harris
This entry was posted on Thursday, November 14th, 2019 at 4:29 pm and is filed under FOOTBALL, Interview, RotoRob. You can follow any responses to this entry through the RSS 2.0 feed. Both comments and pings are currently closed.