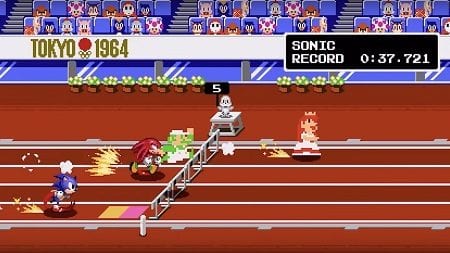 We’re still about eight months away from the Opening Ceremony for the Summer Olympics in Tokyo. That’s not stopping the folks at SEGA from getting a jump on things, however, by releasing its latest title, Mario & Sonic at the Olympic Games Tokyo 2020 for the Nintendo Switch. Does it go for the gold? Or does it settle for bronze? Only one way to find out…

For the uninitiated, Mario & Sonic 2020 is essentially a collection of mini games with dozens of Olympic events represented — some in modern 3D graphics and others in retro 2D. As you’d expect with such a wide variety, some are more fun than others. For example, doing a gymnastics routine requires a mix of button mashing to build up speed, hitting prompts to perform tricks and then timing to stick the landing. Table tennis, however, just has you hit a button to return the ball, which gets dull quickly.

Pleasant is probably the best word to describe the presentation here. All of the classic characters from Nintendo and SEGA are well represented, often sporting fun event-specific attire. The stages look good, and everything has a colourful, whimsical feel. Old-school fans should enjoy the retro events with its NES-era graphics and styling. The music and story-mode sound effects aren’t great, but they eventually blend into the background.

While Mario & Sonic 2020 is a game of bite-sized events aimed at gamers of all ages, it does include a full single-player story mode. It isn’t very good. Sure, the setup was going to have to be silly, but the plot — Mario and Sonic get trapped in a computer game by Dr. Eggman and Bowser, and Luigi has to find a way to rescue them — is just rubbish. The dialogue isn’t good, either, and each character making their signature sound before “talking” gets old real quick.

For as bad as all the trappings are, the game sure spends a lot of time subjecting you to them with way too much meaningless chatting between competing in events. There are only so many different ways to go about saying, “Oh, Mario is in trouble!? Of course I’ll help… right after I compete in this event, and since you’re stuck until I’m done why don’t you compete too?” It needed to be funnier or sillier or something. What’s there is just rough.

Then again, odds are people aren’t buying an Olympic mini-game collection for its riveting story, and most of the 30-plus events (that includes 3D and 2D) are fun and run the gamut between extremely simple and surprisingly involved. We gravitated toward the 2D side initially, and if you remember Track and Field you should have a pretty good idea what to expect, but there’s fun to be had up and down the board on both sides.

Twenty classic characters are selectable, and on the 3D side each one will either have some sort of event-specific boost — for instance, one might run fast on the 100 meter dash while another gets out the blocks extremely quickly — or be an “all-around” competitor. We just bounced around, trying out different ones, but playing against the A.I. feels pretty easy no matter who we selected.

Multiplayer is likely where most will spend their time, and it features up to four players locally and eight online. Local is definitely the cleaner experience at this time with our forays into the online version peppered with lag, which was disappointing given the game’s relative simplicity compared to other titles we’ve had no trouble with. The interface for finding games isn’t great, either, so hopefully a patch adds some features and tightens up the performance.

Mario & Sonic at the Olympic Games Tokyo 2020 offers up a healthy collection of mini games and classic characters, and the new retro mode is a real highlight. Despite an uninspired story mode and shaky online performance it’s an easy game to recommend for anyone seeking casual fun with friends or family.

By HC Green
Tags: Mario & Sonic at the Olympic Games Tokyo 2020, Nintendo, SEGA, Video Game Review
This entry was posted on Wednesday, November 6th, 2019 at 8:09 pm and is filed under Herija Green, Video Game Reviews. You can follow any responses to this entry through the RSS 2.0 feed. You can skip to the end and leave a response. Pinging is currently not allowed.