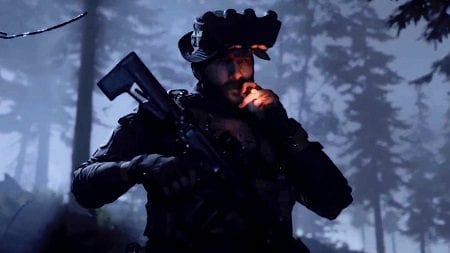 For us, Activision’s long-running Call of Duty series reached its apex with 2009’s Modern Warfare 2, which was the final release from developer Infinity Ward before much of its staff departed to form Respawn Entertainment. Since then, the series has had its share of ups and downs, producing fun games but seemingly trying to replicate the latest trends from other shooters. This year, Infinity Ward is breaking out a reboot with Modern Warfare, which feels more like classic Call of Duty than anything in recent years.

We’ve long been fans of CoD‘s shooting, and that remains the franchise’s strength. It’s crisp, precise and impactful. You can now “mount” your gun in certain points like window frames to offer some semblance of cover, though that’s primarily of use in the campaign.

Without question, Modern Warfare leapfrogs 2017’s WWII to earn the title of best-looking CoD game ever. The character models and cut scenes are both top notch, and the campaign’s various levels are smartly designed with excellent lighting effects. That same level of fidelity isn’t present in multiplayer, of course, but it’s still solid and those sacrifices keep the action humming along at a steady framerate with only occasional lag.

Gone are the days when Activision forked over big bucks to big-name Hollywood talent to voice its Call of Duty games. That isn’t a bad thing, though, as professional voice actors do a fine job of delivering on what has to be considered a pretty good action-heavy story for a first-person shooter. Explosions and gunfire thunder through the speakers as well, allowing you to really feel some of the more intense moments.

After Black Ops 4 eschewed a campaign last year, Modern Warfare brings back the single-player content with a vengeance in a very James Bond sort of way in which character arcs we’ve seen are retconned and familiar faces are reintroduced into a contemporary setting. Most prominent among them is Captain Price, who is probably the closest thing the series has to a signature hero, and the events of the game “pre-date” the formation of the 141 special ops squad featured in MW2.

Here you’ll take control of two soldiers — Alex, a CIA operative, and Garrick, a member of the British Special Air Services — in an effort to retrieve stolen chemical weapons from the terrorist group Al-Qatala. The hunt will lead you to the fictional nation of Urzikstan, which is under siege from Russian General Barkov. Here you’ll meet up with freedom fighting siblings Farim and Hadir, who agree to help track down the chemicals in exchange for assistance in ridding their country of Barkov.

Despite some intriguing potential initially, there isn’t a lot of meat on the bone. It’s fine for what it is, though, and the cinematic influence of films like Zero Dark Thirty, 13 Hours and Rules of Engagement are clear and well implemented. The game has some excellent set pieces, such as the assault on the embassy, and it mixes it some new ideas (guiding a non-combatant to safety via security cameras) as well as bringing back some faves (AC-130!). It’s a fun campaign, and it made us realize how much we missed it last year.

Of course, CoD‘s longevity springs from its multiplayer, and Modern Warfare feels like the first installment in several years that isn’t forcing some new element onto gameplay or aping what’s being done elsewhere. The result is old-school, gun-centric battles in which quickness, accuracy and familiarity with the maps are the key ingredients to success. While it seems counter-intuitive to call a throwback like this a breath of fresh air, it really feels that way.

Most of the bells and whistles have been stripped away, but there’s still plenty to do in terms of customizing your weaponry and tweaking your loadout. Completing daily challenges earns you bonus XP and other goodies, and other challenges unlock rare variants of guns. You’ll recognize most of the modes, and though there’s no true standout among the newcomers, we did enjoy “realism,” which dumps the HUD and makes bullets more lethal. Ground war also benefits from the jump to 64 players and has a definite Battlefield vibe.

Where the multiplayer stumbles is in its maps. There simply aren’t enough of them, and many of the ones that exist have very specific problems — for example, the maps used for the larger 10v10 team deathmatch feel too big, whereas a couple of the 6v6 ones really seem to promote camping and its infuriating cousin, spawn camping (we’re looking at you St. Petrograd). Obviously there’s an incentive to roll out content slowly, but for a franchise that’s been around as long as CoD they could’ve easily reskinned some old favourites to pad out the total.

On the co-operative side of things is Spec Ops, which features a bare-bones extension of the campaign’s story to give the proceedings some meaning. It’s a challenging mode that is more fun if you’re playing with friends for strategizing and just conversing as the matches can drag on. It’s fine as a tertiary mode, though we preferred the star-based version seen back in MW2 in which the operations were more fun sized.

After years of adding to, tweaking and modifying its formula, Call of Duty hits the mark by rolling back the clock with Modern Warfare. It has a solid campaign and crisp multiplayer, even if the map selection underwhelms.