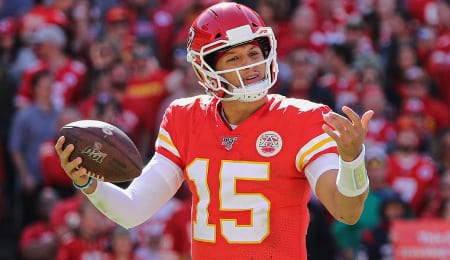 Following two straight losses at Arrowhead, the Chiefs now travel to Mile High to face the Denver Broncos on Thursday night. Suffering an ankle injury in Week Five, Patrick Mahomes has been unable to perform at his casual MVP levels (and there are those that believe he’s not the best QB in the league… see video below), mustering a post-ankle injury statline of 28-296-2 with an interception versus a pre-injury line of 55-676-5 and no interceptions. His completion rate dipped from 64 per cent to 43 per cent since his injury, and he is twice as likely succumb to pressure, according to next gen stats. Denver’s defense is no slouch either, suffocating opposing quarterbacks to just 161 yards per game and a 77 passer rating. The reigning MVP is a high-ceiling, low-floor QB2 this week.

KC’s running backs are officially in a time-share, splitting north of 50 snaps and averaging only 13.5 looks since Damien Williams‘ return. Both Williams and LeSean McCoy are high-risk sleeper RB2s against a flailing rush defense that’s forfeiting 111.8 yards per game and 4.3 yards per attempt.

Hill made an immediate impact as he popped for 5-171-2 on 50 per cent snap count. Through 2018, he produced a line of 12-124-0 on 17 targets against Denver. Hill’s most likely matchup is the slower but coverage-sound CB Chris Harris Jr. who is allowing a passer rating of 81.1 with no touchdowns. Hill should be approached as a high-end WR2 depending on the health of Mahomes. Hardman’s snap count has decreased week-over-week and should soon be faded out as Hill returns to full health.

With Sammy Watkins trending up for Thursday, both Hardman and Pringle will return to their change-of-pace roles as WR4s on a semi-prolific passing offense. If Watkins suits up, he will face untested CB Davontae Harris. Watkins has a plus matchup but his boom-or-bust nature and quarterback uncertainty renders him a low-end WR2.

Surprisingly, Robinson’s 90 per cent average snap count cements him as the third receiver in 11 personnel situations. He’s averaged five targets, 46 yards and 0.5 touchdowns per game. Robinson is an upside WR3 that should capitalize on coverage attention given to Hill and Watkins.

Painfully average QB Joe Flacco enters this contest with a meh line of 196-1,435-6 and five interceptions. He’ll have difficulties doing anything but handing the ball off or throwing play-action passes. Kansas City’s bend-don’t-break defense is giving up 244 yards and 1.3 touchdowns per game but clawing back 1.0 interceptions per game while holding opposing quarterbacks to the league’s ninth best passer rating (85.7). Flacco is a fade, even in two quarterback leagues…

The one-two punch of running backs Phillip Lindsay and Royce Freeman has quietly emerged as one of the NFL’s best tandems. Benefiting from a run-split of 48:52, both Lindsay (four touchdowns) and Freeman have made the most of the opportunity, combining for 973 yards on 190 touches. Running behind the sixth-best O-line against a rush defense allowing 161 yards and 1.3 touchdowns per game, expect Lindsay and Freeman to put up low-end RB1 and high-end RB2 numbers, respectively.

Sutton has emerged as Denver’s premier pass-catching option, commanding 23 per cent target share. The emerging star is likely to see stationary CB Bashaud Breeland across from him. Allowing a passer rating of 84, Breeland is good enough to hold his own. Look for Sutton to produce mid-tier WR2 numbers, clearing at least four catches for 40 yards against a good secondary vulnerable to splash plays.

Trending towards suiting up, Sanders will have a date with slot-hybrid CB Kendall Fuller. Coming off a season-ending Achilles’ tear last year, it’s fair to wonder how effective Sanders will be, especially after tweaking his knee on Sunday. Expect him to be a more bust-than-boom WR3 against a historical stingy slot defense.

Hamilton, the Broncos’ third receiver, has averaged 65 per cent snap count, but lacks usage on a run-first team. He’s a WR4, bumped up to low-end WR2 in the event of injuries to either Sanders or Sutton.

Tight end Fant is averaging 3.3 targets per game and just isn’t getting looks on a pass-starved offense despite having a 72 per cent snap count, 63.8 per cent route participation and a 87.9 passer rating. Leave him on waivers.

Brazilian musician Amon Tobin has been making electronic music since 1995. In 2005, he released his fifth album, Chaos Theory – The Soundtrack to Tom Clancy’s Splinter Cell: Chaos Theory, considered among the finest game soundtracks ever. From this effort comes “The Lighthouse.”

Now it’s your turn. Let us know in the comments below how you think this AFC West rivalry game will pan out.

By Lucas Chan
Tags: Denver Broncos, Kansas City Chiefs
This entry was posted on Wednesday, October 16th, 2019 at 8:01 pm and is filed under FOOTBALL, Lucas Chan, RotoRob. You can follow any responses to this entry through the RSS 2.0 feed. Both comments and pings are currently closed.