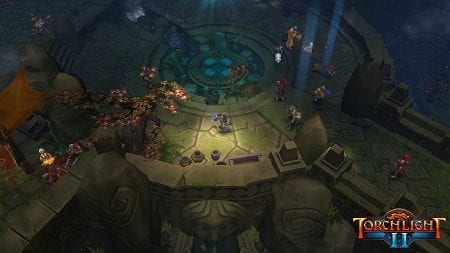 Time for some loot.

It seems like every week brings multiple ports from the PC or mobile world to consoles with an even greater number hitting the Nintendo Switch thanks it to being the last entrant into the current generation. In that environment it’s shocking that it has taken Torchlight II seven years to make the jump from PC to XB1, PS4 and Switch, especially considering how well received the original was on last-gen consoles. Thankfully for all action-RPG fans, though, the wait is over.

It took us a little while to get back into the flow of Torchlight II‘s combat. At first, the lack of a dodge button seemed almost criminal, turning our would-be bad ass into a stationary target and damage sponge. Fast forward a couple of hours and we were fully engaged, wading through throngs of baddies, snapping off basic and special attacks while keeping an eye on our health and magic meters in case we needed to quickly consume a potion in the heat of battle.

Although far from a technical marvel, Torchlight II has a pleasant colourful presentation especially when you’re zoomed out and can take a wider view of the world. If you zoom in while having the Switch docked you can see its age and some of its shortcomings are laid bare. Still, there’s charm in the simplicity of it, and having the screen swarm with foes without any notable dip in performance is a worthwhile swap.

Basic adventuring music plays softly in the background, rarely making itself known, especially when playing in handheld mode. You’ll get occasional voice acting from quest givers, which rates as competent. It’s an unobtrusive and mostly forgettable effort on the audio side.

For all the hours we sunk into Torchlight (and for that matter, Diablo III) we’d be hard pressed to tell you anything about the game’s story. Torchlight II treats its narrative in similar fashion, offering up general motivations and plot points that all amount to pretty much the same thing: evil is happening in the world, go stop it.

After all, in games like Diablo III and Torchlight II, story doesn’t matter. It’s all about the loot, and on that front Torchlight II continues to deliver the goods… and lots of them. If you’ve been seeking a quality loot-heavy ARPG on the Switch there’s only been one legitimate option to this point, Diablo III. Now, Switch owners are being given another choice, and that it checks in for less than US$20 is just the icing on top.

Torchlight II is a mostly linear game as you’ll strike out for a primary mission and then typically come across a handful of secondary quests along the way. Technically, these are optional, but the reality is you need to gather that experience to prepare your character for the main mission. Then again, it’s fun to complete these areas, and it adds more content, so there’s no real reason not to want to invest in them to begin with.

Combat, however, isn’t great. As noted, huge sections of the game can be cleared by just holding down the basic attack button and mowing down hapless enemies that have no real chance against you. Although you can sort of aim at whichever enemy you want to attack, it was never entirely clear how well that was working. It isn’t a problem against the huddled masses, but when a powerful boss appears it can be tricky since it often seemed like mana-based ability strikes were being wasted on the lesser foes around the boss.

Progression is split into two areas: traditional experience and fame. The former comes from every enemy you kill or quest you complete, and each level you ascend allows you to improve core attributes and access better equipment. The latter is primarily earned by defeating “rare” foes, which are colour coded a different way and have a unique name. Leveling up your fame earns you points you can use to improve existing skills or acquire new ones.

It’s a good system, and the UI that has been implemented makes the transition from PC to console as smooth as one could hope for. You’re able to bind attacks, potions, skills, spells and what not to whichever button(s) you’d like, and though it may take a little time to get used to, it ends up being highly functional.

Loot management is thankfully painless as well, employing a radial menu that assigns each new piece to wherever it can be used (i.e., a new helm will automatically be placed in the area for headgear, new breeches to the legs and so on). There’s a lot of inventory room to fill, too, so you’re not constantly headed back to town, and your pet, who also helps in combat, can be loaded up and even sent to town as needed.

It is worth noting that we encountered an annoying glitch that essentially crashed our game any time we returned from putting the Switch in sleep mode. It never cost us any progress, but it did make loading a game more time consuming than it should have been.

It’s been a long journey for Torchlight II to find its way to consoles, but we’re glad it’s here. The engaging world and loot-heavy action don’t feel dated, and it’s especially great for Switch owners that have had so few ARPG options.

By HC Green
Tags: Nintendo Switch, Torchlight II, Video Game Review
This entry was posted on Sunday, September 22nd, 2019 at 2:37 am and is filed under Herija Green, Video Game Reviews. You can follow any responses to this entry through the RSS 2.0 feed. You can skip to the end and leave a response. Pinging is currently not allowed.