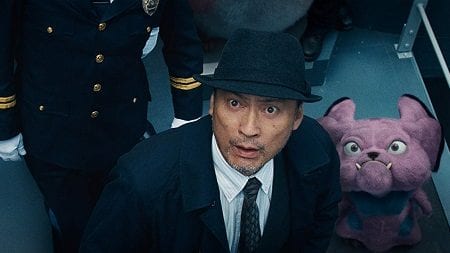 For all of our years as ardent gamers we’ve never gotten into the Pokemon series, having played only a handful of the dozens of releases over the years. Despite that, the moment we saw the trailer for Pokemon: Detective Pikachu we were ready to watch it. Between Ryan Reynolds basically channeling a PG Deadpool and the look of many iconic Pokemon brought into the real world, we were in. Time to find out if it’s a winner or if a wild Snorlax has appeared…

Reynolds delivers as the voice of Pikachu, and he has good chemistry with Smith, which is important since that duo dominates the screen time. Their adventure of trying to unravel the events surrounding Harry’s accident is easy to invest in, and the various set pieces that they go through (the Aipom attack, the battle with Charizard, the interrogation of Mr. Mime and so on) both push the story forward and serve as fun isolated sections.

Despite a story that keeps moving forward, Detective Pikachu feels slow in spots, and we would have liked to see more action elements involving the various Pokemon to spice things up a bit. As it is, even scenes in which things could’ve been cranked up are often played for comedy, such as the underground “battle” between Pikachu and Charizard. Those scenes may still be enjoyable, but we would’ve preferred a better mix of comedic and action elements.

It’s an okay set of extras, though the absence of a true history of Pokemon feature feels odd as it seems like a slam dunk to help introduce a new audience to the extended lore. There is a “detective mode” that you can activate when playing the film, which will offer snippets of info about various Pokemon that appear and the like, but it requires re-watching the film. An alternate opening is the only “deleted scene.”

By HC Green
Tags: 4K, Blu-ray reviews, Deadpool, Detective Pikachu, Movie Review, Pokemon, Pokemon: Detective Pikachu, Ryan Reynolds
This entry was posted on Monday, August 5th, 2019 at 8:34 pm and is filed under Herija Green, Movie Reviews. You can follow any responses to this entry through the RSS 2.0 feed. Both comments and pings are currently closed.