The Downfall of Nick Pivetta 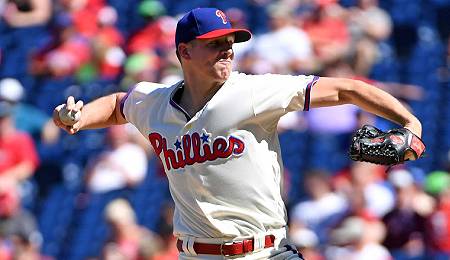 Nick Pivetta has pitched his way out of the Phillies’ rotation. (Eric Hartline-USA Today Sports)

Philadelphia Phillies starter Nick Pivetta showed enough promise last year to be a Wire Troll All-Star, so we forgive you if you were betting on better results from him this season.

Unfortunately, we were all dead wrong on this one.

But let’s take a step back first, and return to 2017, Pivetta’s rather forgettable rookie season. While his command showed promise, he was otherwise shelled something fierce, and the fact he was trotted out there for 26 starts allowed him to compile one of the worst seasons ever by a Phillies’ starter.

The following year is when we began to see the promise, especially in a robust strikeout rate and better control. We were finally on to something with Pivetta, and he landed on many 2019 preseason sleeper lists as a serious breakout candidate.

Clearly, that hasn’t happened, as his K rate has plummeted and he’s been far more susceptible to the long ball, leaving his ERA soaring to an unacceptable rate.

It was clear from the outset that something was off with Pivetta this season, as he was shelled in his season debut and then recorded an 8.56 ERA over his next three starts, prompting a demotion to Triple-A.

In six starts with Lehigh Valley, he showed dominating stuff, but horrific control, yet the Phils brought him back to the bigs at the end of May. Over his next three starts, Pivetta looked revitalized (20 IP, 12 hits, four runs, two homers, two walks and 21 strikeouts). It was a stint that included his first career complete game, and some choice words on live television afterwards (see video below).

The long ball was his undoing over the next five starts, and finally the Phillies had seen enough and yanked him from the rotation.

Could Pivetta morph into one of those valuable multi-inning weapons out of the bullpen? So far, the results have been mixed. In five games covering 11 innings as a reliever, he’s only allowed six hits and four runs while fanning 14. Fantastic, right? But Pivetta has also surrendered two homers and walked six.

Has he blown his chance to be a starter? That’s hard to say, but if that is the case, that may not the be worst thing — especially for Fantasy purposes.

The Phillies are going to use the rest of this season to assess Pivetta’s role going forward, but if he can rein in those walks, there are some early indications that he could be an Andrew Miller type out of the bullpen, and that holds some major Fantasy value.

American hip hop band Funkdoobiest had a 20-year career spanning 1989 to 2009. In 1995, it released its second album, Brothas Doobie, and from that effort comes “Dedicated.” Sharp listeners will recognize that the song samples the classic “Everybody Loves the Sunshine,” by Roy Ayers.

Now it’s your turn. Let us know in the comments below what you think will become of Pivetta and if his days as a starter are over.

By RotoRob
Tags: Nick Pivetta
This entry was posted on Friday, August 2nd, 2019 at 10:55 am and is filed under BASEBALL, Player profile, RotoRob. You can follow any responses to this entry through the RSS 2.0 feed. Both comments and pings are currently closed.