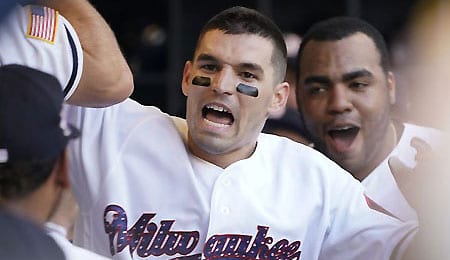 Nate Orf is trying to work his way back to the bigs. (sports.yahoo.com)

Welcome back to another week of Fantasy baseball. We have officially hit June, so there’s no more waffling allowed. You can still salvage your season, but you need to act immediately to start making gains. Use the wire!

This week, dropping MLB attendance was in the news with the Florida teams getting embarrassingly low numbers recently; Hyun-Jin Ryu continues to be untouchable, having a May to remember; and Albert Almora publicly broke down on the field after his line drive injured a young girl.

Nate Orf, OF, Milwaukee Brewers (ESPN: unowned; CBS: unowned): A natural second baseman, Orf is kind of buried in the Brewer organization given the presence of Mike Moustakas and Keston Hiura, but he deserves another look in the Show. At 29, Orf is no longer a prospect, but that’s not to say he couldn’t be an asset in the majors. On Thursday, he was 2-for-4 with a double for Triple-A San Antonio, giving him a five-game hit streak and a .485 BA over the last 10 games. Orf earned himself a 15-game trial with the Brewers last year, but he hit poorly and showed minimal extra-base sock (however, his first career hit was a homer that garnered him a curtain call — see video below). This year in the minors, he’s hitting very well, cranking more homers, striking out less often and continuing to swipe bags. Orf may be blocked at second, but he’s shown he can fill a super utility role in the minors and this season has mostly played outfield, so it would be nice to see him get a look at some point as he strikes us as a player that could surprise if given enough PT.

How about another track from folkster Bruce Cockburn‘s 1993 album Christmas, released on True North Records? Here’s the African-American traditional classic “Go Tell It On the Mountain.”

By RotoRob
This entry was posted on Saturday, June 1st, 2019 at 1:04 pm and is filed under BASEBALL, RotoRob, The Wire Troll. You can follow any responses to this entry through the RSS 2.0 feed. You can skip to the end and leave a response. Pinging is currently not allowed.