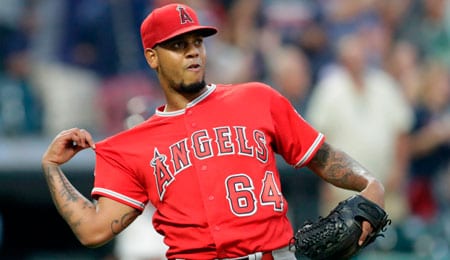 Welcome back to another week of Fantasy baseball. We’re nearing the end of May now, so it’s super important to start filling in your gaps by milking the wire.

This week, the Jays recalled 2B Cavan Biggio, yet another second generation talent (see below for more on this kid); the Twins continued to bash dingers, tying the franchise record with eight bombs on Thursday; and Mets outfielder Yoenis Cespedes underwent ankle surgery, likely ending his season before it began (see below to see who benefits).

And now, let’s get to this week’s Fantasy baseball waiver wire recommendations, with a couple of swingman arms to kick things off…

Felix Pena, SP/RP, Los Angeles Angels (ESPN: 3.4 per cent; CBS: 26 per cent): There’s no doubt Pena has benefited from some luck so far (his wOBA is 65 points below his xwOBA), but the fact is since he was shifted to the bullpen to pitch after the opener, he’s been much sharper. On Monday, Pena held the powerful Twins to just four hits and a run over five innings, which is no easy feat these days. His K rate has continued to dip, but he’s been a much more valuable hurler thanks to his 3.30 ERA. The Dominican was expected to be a contributor this season (see video below), and has actually proved much more effective when starting as opposed to relieving, but perhaps he’s found his niche as the long man now. Give Pena consideration in deeper formats.

Sean Newcomb, SP/RP, Atlanta Braves (ESPN: 29 per cent; CBS: 32 per cent): Newcomb has been shifted to the bullpen and could be the answer — at least for now — to a beleaguered group of relievers in Atlanta. Before getting touched up Thursday, he had hurled seven straight shutout games, racking up three holds and — most recently — a save. This is a significant development with Arodys Vizcaino done for the year, A.J. Minter banished to the minors and Luke Jackson showing he’s human. Newcomb’s WHIP has actually regressed this season, but he’s looked quite effective pitching in relief, especially since swapping in his curve for his changeup. If you’re trolling for saves, give him a look.

Bryan Reynolds, OF, Pittsburgh Pirates (ESPN: 1.8 per cent; CBS: 6 per cent): Reynolds, a second round pick by the Giants in 2016, has really been off the Fantasy radar up until now. Part of the booty the Pirates received for Andrew McCutchen, Reynolds has really thrived since being recalled just over a month ago. Reynolds smoked a pinch-hit three run homer Thursday to help the Pirates pull away and win a shootout over the Rockies, giving him four RBI over the last two games. With a 950 OPS, the dude is commanding everyday playing time, and the fact that he’s starting to show clutch hitting ability sure won’t hurt his chances. Reynolds is a nice NL-only addition.

J.D. Davis, 3B, New York Mets (ESPN: 1.6 per cent; CBS: 7 per cent): Another dude that has quietly become a Fantasy factor for the first time this year is Davis, probably the biggest benefactor of the news that Cespedes is done for the season. A third round pick by Houston in 2014, he was dealt to the Mets this winter after an unproductive trial with the Astros. Davis is a third baseman by trade, but will soon be OF eligible as well, and he’s been hitting well lately, with hits in three straight games. He still strikes out a lot, but has improved in that regard this season, and there’s some serious power potential here (17 homers in 85 games at Triple-A last year). Note that the addition of Matt Kemp could throw water on this plan, but for now, keep an eye on Davis.

Josh Reddick, OF, Houston Astros (ESPN: 23.6 per cent; CBS: 38 per cent): Reddick has batted all over the Astro lineup, but mostly sixth or seventh, which somewhat limits his counting cats. Yet, with a hit and a walk on Thursday, he’s now hit safely in nine straight games, raising his BA to a robust .331. Last season, Reddick didn’t hit well, and it was around this time of season that we advised cutting him in shallow leagues. And while his extra-base sock has continued to regress this year, it’s hard to quibble with an OPS of 845.

Cavan Biggio, 2B, Toronto Blue Jays (ESPN: 1.1 per cent; CBS: 35 per cent): Biggio got the call on Friday to make his MLB debut as the Jays continue to promote their top prospects. At Triple-A this year, he’s continued his trend of being a serious on-base machine (.445 OBP) thanks to exceptional strike zone judgment. The University of Notre Dame product offers Fantasy owners both power and speed, so grab him now and see what he can do — especially in OBP formats.

Kevin Cron, 3B, Arizona Diamondbacks (ESPN: 0.2 per cent; CBS: 14 per cent): Cron was making a mockery of the PCL, mashing 21 homers in 44 games for the Reno Aces before being recalled to Arizona on Friday. While he whiffed in his first MLB at-bat, you’ll definitely want to pay attention to anyone that slugged .800 at Triple-A.

We’re going back to the well with another song from the brilliant 2006 collection, All About Funk. Here’s late American soul singer David Ruffin (of The Temptations fame), with one of his more noteworthy solo tracks, “Blood Donors Needed (Give All You Can),” from 1973. The track was arranged by David Van DePitte, who also worked with The Temptations, Edwin Starr and Millie Jackson, among others.

By RotoRob
Tags: Felix Pena
This entry was posted on Saturday, May 25th, 2019 at 4:59 pm and is filed under BASEBALL, RotoRob, The Wire Troll. You can follow any responses to this entry through the RSS 2.0 feed. Both comments and pings are currently closed.