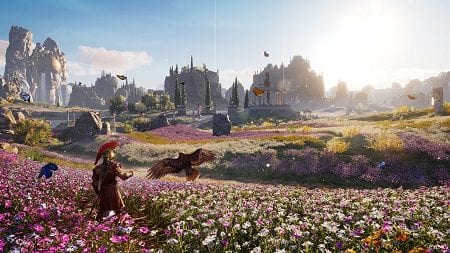 Assassin’s Creed Odyssey is a magnificent game, and many people are still running around ancient Greece months after its launch. However, its first DLC, Legacy of the First Blade was… not great. It provided more of the same in terms of game experience — same types of missions, same map, same gameplay. This would’ve been fine for a free or cheap extension, but for US$30, it’s fair to expect more.

Fortunately, the next DLC set, Fate of Atlantis (not to be confused with the excellent 1990s Indiana Jones graphic adventure) is a much better package. The first episode, Fields of Elysium, doesn’t start off that way, as the first hour is spent with three poorly designed tomb invasions (think the original Tomb Raider, though much smaller in scope) with dim lighting and one-hit kill boobytraps as you search for obscure symbols hidden among the walls.

Once you finish that, along with some body-swapping featuring modern-day protagonist Layla, you’re whisked off to Elysium — and now, rather than simply exploring ancient Greece (again), you’re exploring actual Greek mythology.

Elysium lets you interact with actual Greek gods rather than simply climbing on their statues, as well as mythological beasts. There is a few new magic-based abilities, and the enemies are finally different from the previous roster of soldiers and mercenaries — these magic soldiers now have the ability to freeze out your adrenaline meter.

Best of all, Elysium doesn’t take itself too seriously. The First Blade DLC was a very morose affair which, combined with the mediocre level design, made the whole thing a bit of a slog. Elysium keeps the tone of the main game while acknowledging the ridiculousness of the situation. This creates a fun standalone experience that keeps you immersed in Assassin’s Creed Odyssey without feeling tethered to it.

Also, one of the biggest problems with the First Blade DLCs was that they required certain high levels. While you can do that with your established misthios, Atlantis also gives you the option to play this as a standalone complete with a pre-loaded Level 52 character (we weren’t happy with the ability loadout by default, but you can reset and re-assign to your preference).

Despite a rough start, Fate of Atlantis: Fields of Elysium is exactly what you’d want out of an Assassin’s Creed Odyssey DLC – it’s fun, unique and in a new location. If you’re budgeting your resources on your ancient Greek time, definitely invest in this over the previous lore-heavy First Blade DLC.

By Mike Chen
Tags: Assassin's Creed, Fate of Atlantis: Fields of Elysium DLC, Odyssey, Ubisoft, Video Game Review
This entry was posted on Tuesday, April 30th, 2019 at 2:15 am and is filed under Mike Chen, Video Game Reviews. You can follow any responses to this entry through the RSS 2.0 feed. Both comments and pings are currently closed.