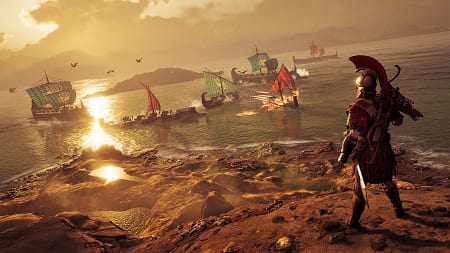 When news of Assassin’s Creed Odyssey first leaked, a lot of people shrugged their shoulders — another AC game, but this time in ancient Greece. When details about the series’ shift to RPG-style gameplay came out, however, fans got excited. It’s here now and may be the finest game Ubisoft has delivered in a decade.

Building on an already solid Origins control scheme (which was essentially lifted from The Witcher 3), Odyssey doesn’t reinvent the wheel. That means much of the series’ long-term clunkiness is gone.

Granted, the parkour remains imperfect — locking on and fighting with various attacks, bashes and dashes can still be problematic in tight spots or crowded battles — but it’s a largely smooth experience coupled with little evolutions in the control scheme, such as a speed dash designed to knock back opponents.

One of the annoying aspects of Origins was the use of a cursor on the menu system. This unfortunately has been carried forward with Odyssey, and while it doesn’t affect core gameplay, it’s still irksome given it’s used exclusively for menu-driven interactions such as assigning weapons and armour, selecting quests, etc.

From a presentation perspective, Odyssey is a contender for the best looking game of 2018. While Origins carried much of the same level of model fidelity and detail, Odyssey has a lusher environment to work with — the Mediterranean is already one of the most gorgeous places in the real world, so it makes sense that it translates here.

From a character perspective, there seems to be greater care in the main character animations, as they’re more subtle and more fluid than before. In many respects, Kassandra and Alexios represent the most realistic looking characters seen to date. Combine that with stellar lighting, amazing water effects and excellent voice acting, and Odyssey is a standout title for this generation.

The rumours are true: Ubisoft basically took the Bioware model and put it into its flagship franchise. Such a drastic move is largely successful — Kassandra and Alexios essentially work like male and female Shepard from Mass Effect.

The difference, though, is that Kassandra is played with a much lighter touch, allowing her to feel more relatable and simply different from the standard grim Assassin. It says quite a bit given that they use essentially the same dialogue, yet Kassandra feels like a lovable rogue in the vein of Arno or Ezio while Alexios feels much more generic like Bayek.

Dialogue choices are present, and while it’s not the response-tone choices of Bioware, you do cycle through different options that present different approaches (jerk vs. diplomatic vs. empathetic). There is also another new karmic choice available, as looting is noted as theft vs. scavenging, though being a jerk doesn’t create impact.

However, one thing that is very new for the series is branching endings based on several critical choices you make throughout the game, so if you want the “best” ending (well, certainly the “happiest” for your character), you might want to look up the general idea ahead of time.

There’s also romance involved with Kassandra and Alexios free to romp around with whomever they want — this was ancient Greece, after all. The romance is more freeform than the slow burn of Mass Effect, and feels more like a collection of summer flings than the buildup of a lifelong relationship. They’re fun and flirty but don’t ultimately add much.

Similarly, sea travel feels like it’s taken from Black Flag, though you recruit crew members through conversation and action. Naval combat has a harsher learning curve than Black Flag, but it’s kept fairly similar. Considering that was one of the most popular aspects of AC3 and Black Flag, it’s a smart decision.

There’s always been some amount of open world in Assassin’s Creed, but Odyssey takes it to a much bigger level. Because of this, the narrative can lose focus by presenting you with so many side quests, from the traditional taking down of a stronghold to fetch quests, in addition to the naval battles and group brawls.

Tracking these can dilute the moment-to-moment experience, and since the main story takes a bit to ramp up, some hours can feel like a grind, no pun intended, though it does at least add variety to the level-up process.

Odyssey seems structured for the long haul, expecting players to invest 40-to-50 hours — keep in mind that all the way to Syndicate, the main quests often took around 15 hours, so this length is new. That inexperience, combined with the new progression system, can lead to long stretches of grinding, particularly when the level rating for enemies is extremely punishing, and the volume can be overwhelming at times.

All of this makes for an extremely dense and layered game that can sometimes feel unfocused despite the strength of the world, story and characters. For those that liked the ability to hunker down and focus on the main quest, you’re out of luck, as Odyssey grabs onto the RPG. For those that loved The Witcher 3 or want to use AC to explore life in another era, however, Odyssey has everything you could possibly ask for.

Oh, and for those that want more of the Animus storyline? It’s still there, and modern-day protagonist Layla is back, but it isn’t overly invasive into the game.

The first Assassin’s Creed felt like a tech demo compared to its sequel. There’s a similar vibe here between 2017’s Origins and Odyssey. Bigger, better and with a lot more heart and character, Assassin’s Creed Odyssey is an easy Game of the Year contender.