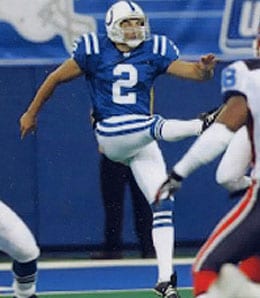 Jesse Nicassio kick started his post-playing career quite nicely.
RotoRob recently had the opportunity to sit down and talk with Jesse Nicassio, the former NFL punter turned inventor. After setting several punting records with Eastern Washington University, he signed with the Rams in 2004, for whom he averaged 44 yards per punt. Nicassio also played with the Colts before an injury derailed his playing career. That’s when his true career went into overdrive, as he launched Juke Performance, a company that invented the EZ Kicker, a product designed to improve punter and kicker skills. But his more recent contribution to the world of athletics training, the MASS Suit, has had a far greater impact. We talked to Nicassio about his inventions and got a chance to ask him about his playing career. Highlights of our conversation included:

Simply click on the play button below to hear the interview in its entirety.

American singer/tabloid fodder Britney Spears has now been making music since 1992. Yes, we know… that’s hard to believe, but it’s true. Her debut album, …Baby One More Time, was released in 1999. From this effort, the third single was “(You Drive Me) Crazy.”

Now it’s your turn. Let us know in the comments below what memories you have of Jesse Nicassio or what you think of his company’s products.

By RotoRob
Tags: Podcast
This entry was posted on Wednesday, February 27th, 2019 at 3:42 pm and is filed under FOOTBALL, Interview, RotoRob. You can follow any responses to this entry through the RSS 2.0 feed. Both comments and pings are currently closed.