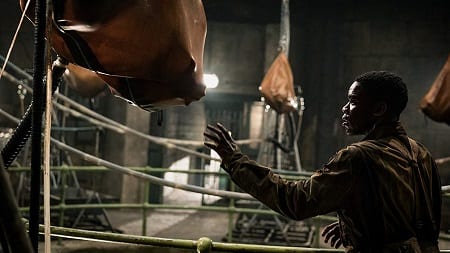 Probably not a great idea.

Given the popularity of Activision’s Nazi zombies phenomenon it’s actually rather surprising that it has taken so long for something using a similar concept to make its way to theatres. That something is Overlord, and with J.J. Abrams behind the project there was plenty of reason for optimism despite a mostly unknown director (Julius Avery) and a distinct lack of household names in the cast. Was our optimism misplaced? Time to fire it up and find out.

Less than 24 hours before D-Day, a squad of U.S. paratroopers is deployed with orders to take out a Nazi radio tower, thus allowing air support for the landing. However, their plane is hit by anti-air fire, scattering the few remaining survivors and leaving only a skeleton crew to carry out the mission: Boyce (Jovan Adepo; The Leftovers), Ford (Wyatt Russell; Everybody Wants Some!), Tibbet (John Magaro; Carol) and Chase (Iain De Caestecker; Agents of SHIELD).

Upon arriving in the French village, the crew encounter Chloe (Mathilde Ollivier), a local that grudgingly offers to aid them in their mission. While it quickly becomes clear that something is wrong in the town, the soldiers have no idea until Boyce gets separated looking for survivors and ends up below the church that houses the radio tower. There he discovers signs of monstrous experiments being conducted on the hapless villagers taken by the Nazis.

After the team captures a Nazi officer (Pilou Asbaek; Game of Thrones) and interrogates him for information, he breaks free and kills one of the American soldiers. Boyce, having grabbed a syringe from the lab, decides to inject his squadmate, shockingly bringing him back to life. With the stakes now raised, the makeshift group must overcome long odds and not only take out the tower, but the underground facility as well.

For a largely anonymous cast, the principles deliver solid performances. At the top of the list is Adepo, who does a great job portraying a reluctant soldier that rises to the moment. His reactions to the insanity around him and ability to maintain his humanity help ground the film in real emotion even as things veer further and further into sci-fi. Character development is a definite strength here, and it actually makes you care about what happens to the soldiers.

We already knew Asbaek could play a menacing villain from his turn as Euron Greyjoy, and he delivers the goods once again as the Nazi officer. He’s sleazy when he’s leveraging his power over Chloe to extract unwanted sexual favours from her. He’s arrogant when he’s holding up to abuse in American hands. And finally he’s vindictive when the tables are turned. There’s no doubt he’ll get more roles like this in the future.

Beyond the performances, Overlord does an effective job of building suspense in the early going and then transitioning to some good action set pieces later on. The film is judicious with its green screen usage, keeping everything feeling gritty and real. Plus, when the time does come for CGI it’s really well done — the late sequence with Boyce trying to escape from an explosion looks completely legit, which is impressive.

We weren’t big fans of Paul, Chloe’s kid brother. His presence, which is essentially to raise the personal stakes, feels unnecessary, and we could’ve done without him. Overlord also fails to give Dr. Schmidt, the man behind all the horrible experimentation, much screen time and, as a result, personality. It feels like a wasted opportunity.

All of the extras are bundled under “The Horrors of War,” which contains numerous behind-the-scenes footage, cast and director interviews, and the usual “making of” fare. It’s slickly produced and informative, so if you enjoy those kinds of extras you’ll be well served here. There are no deleted scenes or anything of that nature, however.

Conceptually interesting and very well executed, Overlord gives you characters to care about, underhanded Nazis to root against and a strong mix of atmosphere and action.

By HC Green
Tags: Activision, Blu-ray reviews, J.J. Abrams, Movie Review, Overlord
This entry was posted on Thursday, February 7th, 2019 at 4:18 am and is filed under Herija Green, Movie Reviews. You can follow any responses to this entry through the RSS 2.0 feed. Both comments and pings are currently closed.