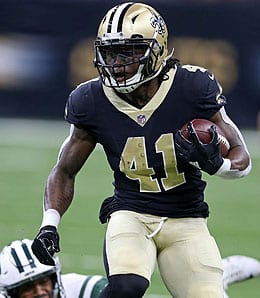 While the Philadelphia Eagles remain in the hunt to squeak into the playoffs, chances are a new Super Bowl champion will be crowned in February. Now the question is just who will this be?

Recently updated lists show that the top three contenders have emerged from the pack and they are the Saints, the Rams and the Chiefs. The Patriots, Chargers or even the Bears may have something to say about that, and from now until the playoffs, we might see one of those teams replacing the Chiefs. Keep that page bookmarked to keep track of the odds if anything does change. For now though, let’s focus on the chances of the three teams with the best odds to win it all this season.

The Saints, who won their only Super Bowl in 2010, have made a mockery of what was supposed to be a very tight and competitive NFC South. What’s most impressive is that a team that has been carried by its offense has been winning games because of its defense for the past six weeks… yet no one seems to have noticed.

The job the Saints D did in shutting down Cam Newton on Monday night cannot be understated, and suddenly New Orleans is on the verge of wrapping up home field advantage throughout the NFC playoffs.

Second-year running back Alvin Kamara, who’s enjoying a breakout campaign with 860 yards rushing, had been relatively quiet for a few games, but he delivered on Monday, racking up over 100 yards from scrimmage with his first rushing touchdown since November 11. Coach Sean Payton has done a very creative job of employing his running attack, and Kamara’s emergence has given the Saints yet another weapon to attack opponents with. Even better, Kamara sports some seriously cool shades while being interviewed (see video below).

Consider Kamara a mid-range RB1 for Week 16, with a slight increase in value in PPR formats.

The Rams also have just one Super Bowl win, but have been waiting even longer (2000) to add to that collection. Unfortunately, this is a team trending in the wrong direction, having lost two straight after getting out to a brilliant 11-1 start. In fact, it’s the first time L.A. has lost consecutive games since Sean McVay became head coach in January 2017.

The Rams’ recent struggles have paralleled a skid by third year quarterback Jared Goff. In Week 13, he was just 17-of-33 with one touchdown and one interception; Week 14 was a total disaster (20-for-44 for just 180 yards with no TDs and four picks); and on Sunday, he was better but again failed to throw for a touchdown and was picked off once.

It’s been a season of mixed results for Goff. He’s already set a career high with 330 completions, after putting up 296 last year, but he’s also been intercepted five more times and fumbled once more. Goff needs to rediscover his first half form very soon or a promising Rams’ season could end early. This team still has a chance for the No. 1 seed in NFC; consider Goff a low-end QB1 for Week 16.

The only AFC team among the three best bets is KC, a team also with one Super Bowl title to its credit, and one with an incredibly long wait between championships, having won it in 1970.

Of course, KC hasn’t even clinched its division yet, finding itself in a dogfight with another 11-3 team (the Chargers) after losing the head to head matchup in Week 15 with a dramatic comeback by L.A.

Quarterback Patrick Mahomes was hardly bad in that game, just not as great as he’s been in recent weeks. Remember 2014, when KC failed to have a passing touchdown to a WR all year? Man, those days are over thanks to the sophomore QB, who already has 45 touchdown passes this year.

Mahomes has two more games to become the third man in history to throw 50 touchdown passes in one season. The others? Peyton Manning and Tom Brady.

Mahomes’ efforts have earned him a Pro Bowl selection in his first season as the starter. The likely 2018 MVP is a slam dunk QB1 week after week, and will be so again in Week 16.

With a middle name of Cleopatra, it’s no surprise that Roberta Flack was destined for greatness. In 1972, she released the first of two albums with Donny Hathaway, Roberta Flack & Donny Hathaway. On this album, the pair covered Carole King‘s classic “You’ve Got a Friend,” actually predating James Taylor‘s quintessential version of the song.

Now it’s your turn. Let us know in the comments below who you think will win Super Bowl LIII.

By RotoRob
Tags: Alvin Kamara, Super Bowl, Super Bowl LIII
This entry was posted on Thursday, December 20th, 2018 at 2:00 pm and is filed under Betting, FOOTBALL, RotoRob. You can follow any responses to this entry through the RSS 2.0 feed. Both comments and pings are currently closed.