The Wire Troll: Malik Monk Getting Tons of Touches 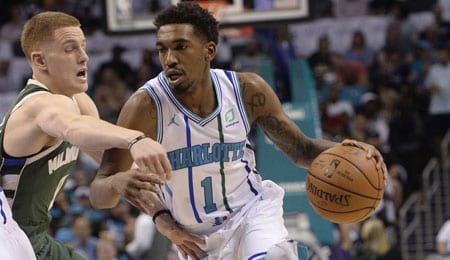 Welcome back to another season of Fantasy basketball. Every two weeks, we’ll be providing owners with recommendations of players that are widely available (owned in a maximum of 50 per cent of ESPN and CBS leagues).

This week, the Lakers listened to Kendrick Lamar talk about sacrifice and preparation; Minny fans let Jimmy Butler know they feel about his trade request; and the Portland Trail Blazers paid tribute to owner Paul Allen, who died earlier this week.

And now, let’s get to our first batch of Fantasy basketball waiver wire recommendations of the season…

Malik Monk, SG, Charlotte Hornets (ESPN: 16.6 per cent; CBS: 45 per cent): The 11th overall pick in last year’s draft, Monk didn’t really see enough PT last season to be Fantasy worthy. That’s not the case anymore as new Head Coach James Borrego employed Monk for 34 minutes off the bench in the season opener, and the soph responded with a well-rounded game (18 points, four treys, four boards, two assists, two blocks and a steal). Friday’s performance wasn’t as impressive (11 points, two treys and two assists in 24 minutes — see video below), but given his 14 shots attempts per game, it’s clear this 20-year-old is going to be an important part of the Hornets’ second unit this season. At Kentucky, this kid was a dynamic player that seemed to be a human highlight reel, so now that he’s getting a chance in the NBA, you better grab him now.

Josh Hart, SG, Los Angeles Lakers (ESPN: 17.5 per cent; CBS: 40 per cent): Another second-season budding star is Hart, who exploded in the Lakers’ opener Thursday with 20 points, four boards, three treys, three steals, two blocks and an assist on 8-for-12 shooting. If not for some foul trouble, he likely would have played more than 27 minutes, but it’s most encouraging to see him get that many touches with LeBron James around. Breakout alert!

Jonas Jerebko, SF/PF, Golden State Warriors (ESPN: 0.1 per cent; CBS: unowned): With Andre Iguodala (calf) out on Friday, Jerebko was the first frontcourt player off the Warrior bench, and he enjoyed a strong game with 10 points, six boards, two treys, an assist and a steal. Jerebko played the hero, tipping in the game-winning bucket with 0.3 seconds to play. He’s never quite delivered on the promise of his first two seasons, but he’s periodically been a decent plug and play option as appears the case now with Iggy out. Just beware that Jerebko’s PT is likely to fluctuate greatly, so he’s a risky play, best limited to deep leagues or as a DFS option.

British rockers Dire Straits was always among our faves, and well before it became an MTV darling came its second album, Communique, in 1979. The B side to the album’s only single was “Where Do You Think You’re Going?”

By RotoRob
Tags: Charlotte Hornets, Malik Monk
This entry was posted on Saturday, October 20th, 2018 at 5:06 pm and is filed under BASKETBALL, RotoRob, The Wire Troll. You can follow any responses to this entry through the RSS 2.0 feed. Both comments and pings are currently closed.