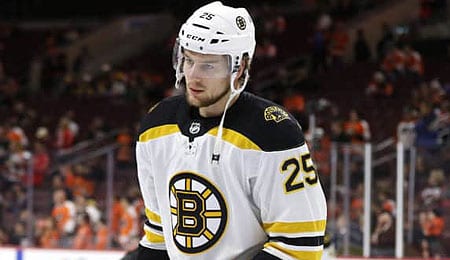 Brandon Carlo can help you in a few categories. (Amy Irvin/The Hockey Writers)

Welcome back to another week of Fantasy hockey. We’re into mid-October now, starting to get our feet wet this season. There are still tons of gems to be had on the wire, so mine it, baby, mine it.

This week, the NHL was none too pleased when an arbitrator reduced the suspension of Austin Watson; meanwhile, another troubled player is Florida’s Michael Haley, who has entered the league’s assistance program to deal with an undisclosed issue (we’re sure you can guess what this is about); and, in some actual on-ice news, Auston Matthews is off to a crazy start, tying the NHL record with nine goals in his first five games. The others who have done that? Alex Ovechkin, Patrick Marleau, Mario Lemieux and Mike Bossy.

Brandon Carlo, D, Boston Bruins (ESPN: 0.5 per cent; CBS: 4 per cent): Carlo has yet to record a point, but he’s playing on the second pairing and has gone +2 so far. He enjoyed a promising rookie season with six goals and 10 assists before slipping last season. We’re expecting Carlo to rebound this season while recording a very strong +/-, and he’s currently averaging two hits and a block per game. Carlo, taken in the second round in 2015, is a big shutdown defender, but there could be a bit of offensive upside here that the 21-year-old has yet to fully tap into. Let’s just hope he can stay healthy this season (see video below).

Dylan DeMelo, D, Ottawa Senators (ESPN: 1.4 per cent; CBS: 8 per cent): Ottawa is supposed to suck hard this season, yet DeMelo is tied for the NHL lead at +5 so far. He enjoyed a breakout of sorts with the Sharks last season, registering 20 assists and is off to an even better start so far, with a goal and a pair of helpers through four games. Just 25, he’s capable of racking up a fair amount of assists this season, so grab him while you can.

Matt Grzelcyk, D, Boston Bruins (ESPN: 0.3 per cent; CBS: 6 per cent): With Torey Krug out a couple of weeks, Grzelcyk has been moved onto the top power play unit, making him a superb DFS play and a nice short-term addition in standard leagues. Better yet, Boston’s power play has been rolling, and Grzelcyk has played a big role with a pair of assists (already matching his PP points from last season). He had a decent season in 2017-18 with 15 points, but given how much more ice time he’s getting this season, he’s likely to blow past that, especially if he keeps getting time on the man advantage.

Denis Malgin, C, Florida Panthers (ESPN: unowned; CBS: 2 per cent): Malgin has been promoted to the Panthers’ second line, where he’ll play with wingers Jonathan Huberdeau and Vincent Trochek, a pair that Malgin has enjoyed success with previously. Malgin, 21, hasn’t shown a ton of scoring in his career so far, but now he has a glorious opportunity to do so. Last season, he did get a fair amount of PP time, scoring once and adding five assists, and the fact that he already has five shots and is seeing more action this season is a good sign. The breakout is coming, so get ready to pounce on Malgin.

Robin Lehner, G, New York Islanders (ESPN: 8.2 per cent; CBS: 31 per cent): Lehner made his first start of the season on Monday and was brilliant, stopping 35 saves to shut out the Sharks. He’ll be back between the pipes against the Predators on Saturday night as he looks to take over the top goalie job for the Islanders. Lehner really slid last season — his second as the Sabres’ starter — but he’s off to a great start with the Isles. If he keeps this up, he’s going to be a nice addition for those seeking goaltending help.

The late great Solomon Burke was a preacher and singer who was instrumental in the American R & B sound of the early 1960s. Like many black artists of that era, he did some blaxploitation soundtrack work, releasing the score for Cool Breeze in 1972. Here’s the kick-ass title track, which also found its way into the Taiwanese movie, Knight Errant, the following year.

By RotoRob
Tags: Brandon Carlo
This entry was posted on Saturday, October 13th, 2018 at 5:16 pm and is filed under HOCKEY, RotoRob, The Wire Troll. You can follow any responses to this entry through the RSS 2.0 feed. Both comments and pings are currently closed.