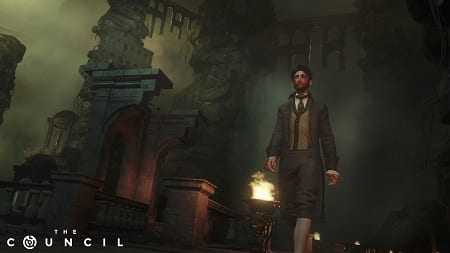 Things get weird and supernatural in Burning Bridges.

You’re still stuck in the mansion for long stretches, looking for clues or items or conversations for a large chunk of the episode. There are still puzzles that are both too simple and too obtuse at the same time. There are still technical problems — in fact, these feel worse as the game continues, as character lip sync is completely off in the episode’s most pivotal conversation. In fact, there are moments in the conversation when mouths don’t even move.

That’s the bad. The good? The story itself is unfolding at an intriguing rate, and the big twist/reveal answers a lot of world questions and unveils the truth behind Lord Mortimer. The writing is overly expository and clunky at times, but it is clever and raises the stakes of the series as it approaches the finale.

In addition, by now the leveling system has taken a firm hold, and your chosen path has become distinct. Abilities are used quite a bit and give you many paths to completion. It is still a little uncertain just how much actual branching is happening — it doesn’t feel like things are truly veering off course, though the way you get there is unique. And after the big reveal moment, a new mechanic is introduced, one that can help give you a leg up in conversation battles.

So the good news is that the guts under the hood of the game are evolving in a smart direction, and the story itself is unfolding in an intriguing way. It’s the execution that remains problematic at times, and with only one episode left to go, it feels like that will be the legacy of the title.

Burning Bridges brings both the good and bad of The Council as its penultimate episode. Problems are exaggerated, but the story takes interesting turns and the core mechanic is still fun. If you’ve played it this far, you’ll get exactly what you expect.

By Mike Chen
Tags: Burning Bridges, Focus Home, Lord Mortimer, RPG, The Council, The Council - Episode 4, The Mad Ones, Video Game Review
This entry was posted on Thursday, October 4th, 2018 at 3:01 pm and is filed under Mike Chen, Video Game Reviews. You can follow any responses to this entry through the RSS 2.0 feed. Both comments and pings are currently closed.