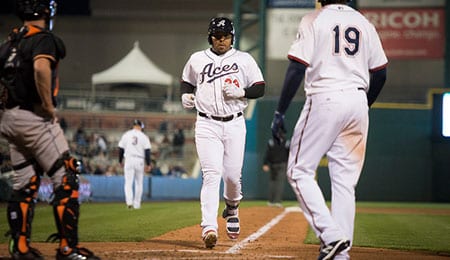 Yasmany Tomas is starting to heat up at Triple-A. (Tony Contini/Tahoe Onstage)

Welcome back to another week of Fantasy baseball. We are now into the unofficial second half of the season, so no more pussyfooting allowed. Time to step up and claim your championship!

This week, the injury-plagued Cards suffered another blow as Carlos Martinez hit the DL with an oblique strain; Manny Machado wasted no time making an impact for the Dodgers, delivering two hits and two walks in his debut; and things keep boiling over in Washington as Stephen Strasberg was rocked in his return from the DL, and then he got into it with rotation mate Max Scherzer.

Yasmany Tomas, OF, Arizona Diamondbacks (ESPN: 0.1 per cent; CBS: 6 per cent): Was it really just two years ago that Tomas hit 31 bombs? It seems longer since he was outrighted to the minors early this season. But that pop that was his calling card finally seems to be resurfacing at Triple-A as he’s bashed four long balls in the last eight games (see video below for one of his recent moonshots). Tomas likely needs a trade to regain an MLB gig, but he’s upping his value with his recent play, so bears watching. This immense Cuban can crush a ball, so it’s hard to believe we’ve seen the last of him. Free Yasmany!

Jackie Bradley Jr., OF, Boston Red Sox (ESPN: 15.1 per cent; CBS: 28 per cent): JBJ has had a lost season, but as the break came, he was finally starting to show signs of life, hitting safely is six of his last seven, driving in runs in three straight and hitting doubles in back-to-back games. Yes, the former Cape Cod Leaguer sat Friday, but given his glovework, he’s going to be in the lineup most days, and frankly, he’s been a bit unlucky with the bat this year. After all, Bradley ranks 20th in the bigs in hard hit percentage, so clearly he’s still smoking the ball. We predict that the offensive freefall he’s experienced over the last year and a half ends in the second half, making him a fine buy-low candidate.

Kirby Yates, RP, San Diego Padres (ESPN: 28 per cent; CBS: 43 per cent): Now that Brad Hand has been traded, Yates will take over as the Padres’ closer. Yates has been stellar this season, going undefeated through 39 appearances with a good groundball rate and a shockingly good (probably a tad lucky) HR/FB rate. He’s only been scored on in one outing since the end of May, putting up a filthy good performance in June as part of a breakout campaign for the 31-year-old veteran.

Robert Gsellman, RP, New York Mets (ESPN: 7.9 per cent; CBS: 21 per cent): Another option for those trolling saves is Gsellman, who has taken over as the Mets’ primary ninth inning option. Jeurys Familia will be sent packing any day now, sealing the gig for Gsellman. Gsellman’s ERA has much improved with the full-time move to the bullpen this year, and while he has any many saves converted as he’s blown, he’s looked far more comfortable finishing things off lately. He teased us as a starter in a quarter season in 2016, but crashed and burned in the role last year. Now it seems Gsellman has found his niche, and will offer much more value in the second half as a result.

We were seeking the edit version from the 45, but what the hell? Let’s go with the full-length version of this Clash classic, “Straight to Hell.”

By RotoRob
Tags: Yasmany Tomas
This entry was posted on Saturday, July 21st, 2018 at 6:59 pm and is filed under BASEBALL, RotoRob, The Wire Troll. You can follow any responses to this entry through the RSS 2.0 feed. Both comments and pings are currently closed.