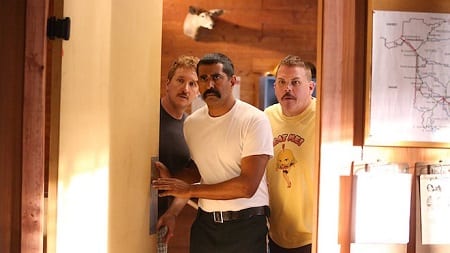 When Super Troopers was released back in 2001 starring the mostly anonymous members of the Broken Lizard comedy team, it made little more than a ripple amid mediocre reviews and a modest take at the box office. It became a cult favourite on the home market, though, and nowhere was that more apparent than when the crowdfunded sequel met its $2 million goal in 24 hours. Now it’s time for the real challenge of Super Troopers 2 — living up to expectations.

After the original ended with the highway patrolmen working as Spurbury police, the sequel finds all of them having been fired for an incident involving actor Fred Savage. Farva (Kevin Heffernan) is a construction foreman, overseeing Mac (Steve Lemme) and Rabbit (Erik Stolhanske), Thorny (Jay Chandrasekhar) is working as a lumberjack and Foster (Paul Soter) is living with Ursula, who is now the Chief of Police in Spurbury.

A phone call from Captain O’Hagen (Brian Cox) assembles the crew north of the border where he reveals to them that they’ve been given a chance to be policemen again, overseeing the handing over of a section of land in Canada to the U.S. Their job is to work with local law enforcement (read: Mounties) to ensure a seamless transition, though the locals seem none too thrilled with the prospect of becoming Americans.

Further complicating matters, the team uncovers caches of illicit drugs all over what will soon become their jurisdiction. Now O’Hagen, Thorny and the rest must navigate an adversarial relationship with the Mounties, investigate the drug problem and continue preparing for the transfer of Canada’s land to the U.S.

In many ways, Super Troopers 2 is more a collection of skits than a cohesive project. For a lot of films we’d consider that lack of continuity a minus. Here, though, it’s par for the course with plenty of different combinations of characters put in various situations to see what sticks. There are some duds to be sure, but there was also a number of laugh-out-loud moments, and if you enjoyed the first one’s style this is essentially more of the same.

While not everything holds up from the original — Thorny is given less to do, and O’Hagen seems so much older now — everyone involved seems to be having a good time, and that energy is infectious through the screen. This goes for many of the newcomers as well, including Rabbit’s love interest, Emmanuelle Chriqui, and Paul Walter Hauser as “Canadian Farva.” The star is still American Farva, though, as he remains consistently funny with his tone deaf jerkiness.

There are lots of fun cameos and callbacks to the original, including Jim Gaffigan and Lynda Carter, though we could’ve even gone for a couple more like the German couple and maybe a little nod to Mr. Galikanokus or Johnny Chimpo.

If you’re going into this hoping it’s gonna top the original, odds are you’ll be disappointed. The Mounties, while fun in their own right, are no match for the Spurbury PD as foils, and we don’t see ourselves quoting this one the same way we did with “Littering and…” or the Dimpus Burger “liter of cola” schtick. And how in the hell did we not get a Farva-Dimpus reunion?

On paper, having Rob Lowe play a washed out semi-pro hockey player turned Mayor seems like a good move, but his performance is just off. Even in a film full of bad, stereotypical accents, Lowe’s delivery stands out. We just can’t shake the feeling that he should’ve been funnier.

Super Troopers 2 has a surprisingly entertaining 40-minute “making of” extra that has lots of interviews and bloopers — if you’re a fan of the original it’s worth watching for sure. About 20 minutes of extended/deleted scenes are also on there along with a short Kevin Heffernan promo, both of which are worth a look. It’s a nice collection of bonus material.

Following up a cult hit almost 20 years later was always going to be a difficult task, and while it isn’t as memorable as the original, Super Troopers 2 should sate your appetite for juvenile humour.

By HC Green
Tags: Blu-ray reviews, Broken Lizard, Fred Savage, Movie Review, Spurbury, Super Troopers, Super Troopers 2
This entry was posted on Tuesday, July 24th, 2018 at 5:29 pm and is filed under Herija Green, Movie Reviews. You can follow any responses to this entry through the RSS 2.0 feed. Both comments and pings are currently closed.