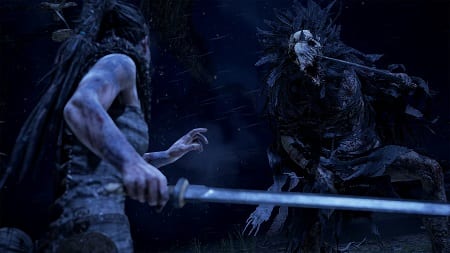 Combat is when Hellbladeshines brightest.

We were late to the party on Hellblade: Senua’s Sacrifice, the latest effort from veteran developer Ninja Theory, missing its launch on the PlayStation 4 last August. With Xbox One owners getting their chance to experience the game, however, we swooped in and checked out the Xbox One X enhanced version. Time to find out if it’s on par with some of Ninja Theory’s earlier work, like DmC: Devil May Cry and the criminally underappreciated Enslaved: Odyssey to the West.

There are two primary elements in Hellblade: puzzle solving and combat. Perhaps somewhat surprisingly, the former is actually much more prevalent as the basic setup for progression is that you’ll reach a set of doors with runes on them. You then focus on the runes to essentially burn the image into your mind and must find that shape in the surrounding area.

When you’re near a specific rune it’ll start to appear repeatedly in your vision, at which point you’ll need to check around more closely until you locate the image — the game frequently uses angles to do this, as looking at two different objects in a specific way will create the rune you’re searching for. It’s clever and plays into the story, though we could’ve gone for more variety as the game progressed.

Combat has a heavy, meaty feel to it with Senua showing her skills as a warrior. The fundamentals are pretty traditional as you’ll mix light and heavy sword strikes with physical attacks to form combos. Defensively you can dodge and block, and if you time your block correctly you’ll end up parrying the blow and leaving your opponent vulnerable for counters.

When you get into a groove, the swordplay can look really slick as you fend off multiple foes at once or take down one of the bosses. If you get overwhelmed you can activate your focus, which slows time temporarily and allows you to unleash a flurry of strikes. It’s a really solid system, and we found ourselves longing for more chances to engage during some of the lengthier sequences without any encounters.

Playing Senua’s Sacrifice shortly after God of War made for an interesting contrast. Both games look great, but Ninja Theory took a much darker adaption of Norse mythology — which is saying something since GoW is hardly a “feel good” type of game. Everything is very funneled with few branching pathways. That allows for a lot of grisly detail, allowing the idea of Hel to really be driven home with its graphic images of suffering.

While most of your time is spent in oppressive darkness and misery, those moments when the game relents and shows a brighter world are all the more memorable. Senua’s expressiveness is excellent, and the enemies are sufficiently imposing. The camera is pulled in a little tight for our taste, which creates occasional trouble during battle, and enemy variety is lacking, but for the most part it’s really well done.

Strong voice acting across the board is part the game’s outstanding soundscape with multiple voices often delivering at once as part of Senua’s tenuous grip on reality. The music shrinks and swells in all the right moments, helping Hellblade deliver a superb presentation.

Hellblade begins as Senua reaches the shores of Helheim with the head of her deceased lover Dillion in tow. Her objective is to enter Hel and rescue Dillion’s soul from Hela. There’s a second part to Senua’s story, however, and that deals with her psychosis — she hears voices, including one that serves as a narrator, that her father believed to be a curse.

It’s a unique angle, and one that’s central to the both the game’s story and your progression through it. There is no HUD and no objective markers here. The voices will fill in Senua’s story, offering hints as to how to progress during the story/puzzle sections and warning during combat, such as when an enemy is behind you, when you should activate your focus and when you’re close to defeat.

Although it features all manner of mythological elements, Hellblade feels decidedly grounded thanks in equal measure to the gritty world that’s been created and the deeply personal quest Senua is on. Her lover died, she feels responsible and she’s willing to do whatever it takes to retrieve his soul from the underworld.

It’s a very linear experience with the only decision of note being which of the two early bosses to tackle first, but there are 44 lore stones scattered about where the mysterious Druth will tell you tales of the world of the gods. It took around nine hours to complete the game with no more than a handful of failures in combat and the occasional fall or being burned to death sprinkled in.

At the beginning, the game informs you that each defeat will bring you closer to permanent death (in the form of the loss of your saved file). It’s visually represented as a spreading rot on Senua’s arm, and theoretically when it reaches your head you’ll need to start over. In practice, it appears that no such mechanic exists, and the warning was put in place to add some tension and feed into the game’s theme of mental illness.

With or without perma-death, Senua’s Sacrifice delivers palpable tension. In fact, it’s one of the better horror games we’ve ever played, even if it isn’t marketed as such. Certain moments, such as the “blindness” trial, stay with you, and it helps make the combat sections so effective because it feels good to be empowered again to actively defend yourself.

A dark story set within an even darker world, Hellblade: Senua’s Sacrifice blends solid gameplay with an engaging narrative to produce a highly compelling experience.

By HC Green
Tags: Hellblade: Senua's Sacrifice, Ninja Theory, Video Game Review
This entry was posted on Wednesday, April 25th, 2018 at 6:42 pm and is filed under Herija Green, Video Game Reviews. You can follow any responses to this entry through the RSS 2.0 feed. Both comments and pings are currently closed.