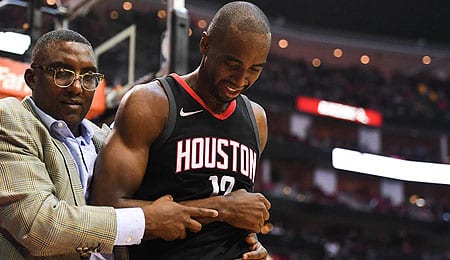 Welcome back to another week of Fantasy basketball. With the NBA trade deadline just days away, you need to be ready to pounce on players that are put in better situations because of a deal.

This week, LeBron James shot down rumours that he’s considering signing with the Warriors this summer; after getting bought out by Phoenix, Greg Monroe will sign with Boston; and Russell Westbrook had to act as his own security when a fan got in his face in Denver on Thursday.

Jarrett Allen, PF/C, Brooklyn Nets (ESPN: 11.1 per cent; CBS: 38 per cent): Allen recently took over as the starting centre in Brooklyn, and has looked better each game since the move. Allen’s PT is up, his FG accuracy has been off the charts and each game his scoring has gone up, culminating in 20 points in just 24 minutes on Friday. The rookie will need to watch his turnovers, but looks poised for a big second half as he gets more acclimated to the NBA. You can already see the progress he’s making month to month, and at this stage, he’s nearly looking like a top 50 player. Allen isn’t huge for a centre, but makes up for it with a massive wingspan, great reach and a projectable frame.

Luc Mbah a Moute, SF, Houston Rockets (ESPN: 0.9 per cent; CBS: 3 per cent): Mbah a Moute has already seen a recent uptick in PT but with Eric Gordon (back) out, he looks like a real nice short-term or DFS play. Mbah a Moute is really more of a deep league asset, but every now and then he’s capable of helping out (see video below), and he has averaged 10 points over the last three games. His touches are up recently, continuing a trend in which he took two more shots per game in January. The veteran is seeing his most PT since 2014-15 after falling into obscurity for a couple of seasons on a deep Clipper squad.

Marreese Speights, PF, Orlando Magic (ESPN: 0.3 per cent; CBS: 1 per cent): With Aaron Gordon (hip) out, Speights has been getting it done, averaging 19 points over the last two games while canning seven treys. Speights really hasn’t seen enough PT this season to have any use, but is reminding us what he’s capable of when he gets 20+ minutes. His shooting touch has been much better of late, especially in the last two (12-for-22), and he should continue to either start at PF or see enough time to offer value while Gordon is out. Speights is capable of getting red-hot offensively, as he showed Friday when he scored Orlando’s final 10 points of the first half as the Magic hammered the Lakers.

Marco Belinelli, SG, Atlanta Hawks (ESPN: 3.7 per cent; CBS: 19 per cent): Belinelli did not shoot well on Friday (2-for-8), but what jumped out for us was the 10 trips to the charity stripe. He nailed nine of them en route to 15 points after pouring in 22 on Wednesday, when he was a perfect 6-for-6 from the line. We’d like to see Belinelli get a bit more PT, but if he keeps earning trips to the line, he’ll be an asset in points. Another thing that will help is if he heats up from the floor; he struggled in that regard in January. Overall, it’s been a down shooting season for Belinelli, as he’s dropped to 41 per cent after canning 42.9 per cent of his attempts last season. Note that he’s on an expiring contract, so could be headed somewhere at the deadline, and as a long-time three-point threat, he could be quite useful if he lands in the right situation.

By RotoRob
Tags: Brooklyn Nets, Jarrett Allen
This entry was posted on Saturday, February 3rd, 2018 at 6:09 pm and is filed under BASKETBALL, RotoRob, The Wire Troll. You can follow any responses to this entry through the RSS 2.0 feed. Both comments and pings are currently closed.