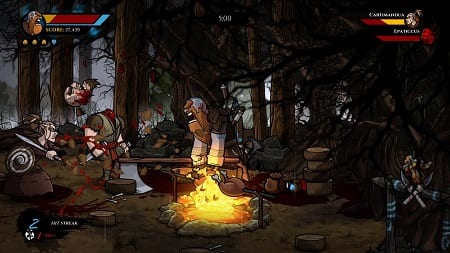 It’s nearly impossible to spend more than a few minutes with developer Darkwind Media’s newest creation, Wulverblade, without being reminded of numerous side-scrolling beat ’em ups of the past. From Street of Rage to Castle Crashers, River City Ransom to Shank, the influences are unmistakable, but that doesn’t mean Wulverblade fails to carve out its own identity.

There’s a fair amount to familiarize yourself with here as you have two types of attacks (regular and heavy), a jump, a block and a defensive roll, plus you can sprint, trigger a special rage attack and even summon a pack of wolves to maul your foes. Within these basics is a handful of combinations, like a dashing tackle or a ground-shaking downward strike when airborne.

Although each of the three available characters handles a little differently — Caradoc is balanced, Brennus is slow but powerful and Guinevere is quick but deals little damage — they’re all fundamentally the same outside of a move here or there. That’s probably a good thing as it takes a while to actually get good at the game.

What’s interesting about Wulverblade on that front is how it looks like it’d be a mindless hack n’ slash, but in reality there’s a good bit of strategy that goes into succeeding as you go. Blocking is a big part of survival, and successfully countering slows things down momentarily while opening up enemies to your attacks. It’s cool, but timing those blocks feels a little inconsistent, which can be frustrating.

Given the numbers you’ll be putting into their graves, the amount of attack combos feels pretty limiting as well, and we got some combat fatigue as the death toll piled up. Weapons and body parts frequently litter the ground and can be picked up and used, but they’re either thrown for ranged damage or quickly degrade after a few strikes. Using things like spears and tree limbs to bash enemies is fun; we just wish it happened more often.

Colourful and delightfully visceral, Wulverblade never skimps on the bloodshed with limbs and heads routinely severed from their hosts. It’s an interesting mix of cartoonish and gruesome, but it’s well done, and the various enemy types are instantly distinguishable from one another. We thoroughly enjoyed the accents along with the screams of our defeated foes, while the soundtrack holds its own as well.

It’s 120 AD and Rome has invaded Britannia with a force of more than 5,000 men. Making matters even worse, the southern tribes have aligned themselves with the Romans. The northern tribes have no interest in making peace, however, and they plan to drive their adversaries out. Led by Caradoc, they’ll need to overcome the odds to emerge victorious.

While ultimately unnecessary, Darkwind’s decision to ground the game in actual history — real locations, weapons, etc. — is interesting. The setup of the levels is pretty standard as you’ll work your way through eight stages, typically consisting of a smattering of smallish encounters and a few all-out assaults leading up to a boss fight.

Along the way you’ll hack, grab, toss and block Romans and their traitorous southern comrades. There are some genre staples, such as a rage meter to fill and point-building treasure to collect, but it steers clear of gimmicks for the most part. You’re limited to one wolf summon per level, and you’ll likely only trigger your rage three or four times, so it really comes down to your skill and strategy.

As much fun as Wulverblade can be, however, it does come up short at times. Enemies frequently commit the unpardonable hack n’ slash sin of attacking from off screen, and if they get you on both sides there are times when they can juggle you back and forth, depleting your health with infuriating speed. To that end, food drops are too infrequent.

Speaking of drops, the game’s biggest structural problem is assigning the same button used for basic strikes to picking up items. That means there’ll be times when you’re squaring off against a clump of enemies and rather than slashing your sword into their collective midst you’re picking up a dagger to throw at one of them, giving the others time to gang up on you. That’s bad design.

It also feels like Wulverblade would’ve benefitted from some kind of upgrade system, either in the form of buffing attributes or buying/upgrading weapons. Minus that, you’re essentially always playing the same way, and for a game that only offers a wave-attack mode beyond its short campaign more reasons to replay it would’ve been appreciated (there’s a mode that unlocks when you beat the game, but it holds limited appeal).

If you have a buddy around, the two of you can tackle the game co-operatively, and honestly that’s the best way to play. Everything scales up with tons of enemies, making things more chaotic and fun. Sure, there are times when it’s easy to lose track of your character amid the chaos, but we still had loads of fun blitzing through it this way with lots of laughs over a particularly grizzly death.

Despite deploying some maddeningly cheap tricks, Wulverblade is still a fun game that fans of beat ’em ups should find well worth their time.

By HC Green
Tags: Darkwind Media, Street of Rage, Video Game Review, Wulverblade
This entry was posted on Friday, February 2nd, 2018 at 4:44 pm and is filed under Herija Green, Video Game Reviews. You can follow any responses to this entry through the RSS 2.0 feed. Both comments and pings are currently closed.