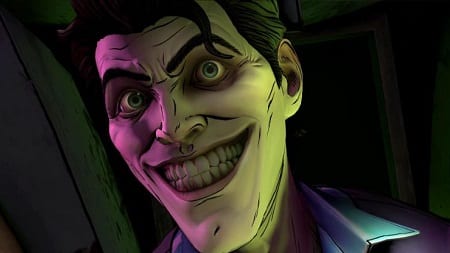 What Ails You, TellTale’s fourth episode of Batman: The Enemy Within, is a brisk affair that balances the story between Bruce Wayne’s two primary relationships in this iteration of the character: Selina Kyle in the first half (or Iman Avesta, depending on your actions in the last episode) and John Doe (AKA, Joker) in the final half.

Both relationships twist and turn as the story uncovers the truth behind Amanda Waller’s intentions and the motivation for The Pact between Harley Quinn and other supervillains.

The Selina relationship is fairly standard Batman fare — their rollercoaster relationship is treated as realistically as you could imagine given the medium, but there aren’t any real surprises. John Doe, however, continues to be the star of the series. This unexpected take on Joker is wicked fun and has you rooting for him to be on the right side of the law.

Of course, this is the penultimate episode, so it doesn’t end neatly for anyone. As the main conflict between Harley Quinn and the Agency come to a head, it catches Bruce and John in between. The player doesn’t have a ton of *ahem* agency over this — everything is pretty linear — but the remix of traditional Batman archetypes is refreshing and keeps you on your toes.

At about 75 minutes long, though, it’s over before you know it, and in many ways given their short run times, it feels like the last two episodes could’ve been combined together.

A short but interesting Batman adventure, What Ails You is still fairly light on the action but ramps up the character intensity and sets up for a fascinating finale.