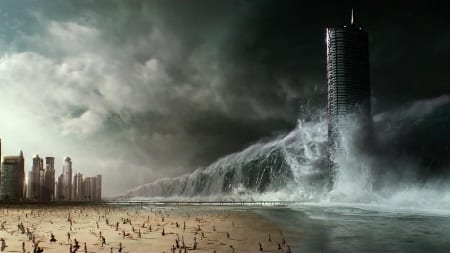 A tidal wave in the desert!? Geostorm you’re so crazy.

In some sense, disaster movies are kind of like pizza, even when they’re bad they’re sort of good. From the delicious absurdity of Twister (and the good vs. evil storm chasers) to the Rock getting one over on earthquakes in San Andreas, these films are almost always good for some popcorn fun. The genre’s newest entrant is Geostorm, directed and written by veteran writer Dean Devlin.

With the world facing an increased number of extreme natural disasters, countries around the world get together, throw some scientists and money at the problem and come up with Dutch Boy, an orbital satellite system that’s able to control weather on a global scale. The program is a complete success, but with control of the station set to leave American hands, glitches start to take place.

Refusing to be the man that relinquished control of a damaged system, President Palma (Andy Garcia) has project lead Max Lawson (Jim Sturgess) dispatch one person to the space station to figure out what’s going on. That man is Jake Lawson (Gerard Butler), Max’s younger brother and the man most responsible for Dutch Boy’s success. Despite lingering bad blood over Max firing Jake, the latter puts his feelings aside and heads to space to fix the problem.

With Jake aboard the space station and Max on Earth, disasters continue to pile up amid mounting evidence that what’s happening isn’t a mistake but a targeted attack. In what is now a race against the clock, the Lawson brothers must come together for the sake of humanity to unravel the mystery of who is behind the Dutch Boy attacks.

Much of the CGI in Geostorm is quite good, particularly the Hong Kong explosions and most of the scenes in outer space. In a disaster movie it’s of paramount importance that what’s going on at least has a whiff of believability, and a lot clearly went into making that happen. It’s not perfect, and some of what goes down makes no sense — such as the lightning storm explosion — but it’s certainly good enough most of the time (more on that later).

While Butler’s acting prowess probably tops out as “off-brand Nicolas Cage,” which is, of course, high praise, there’s an endearing level of cheesiness inherent in him playing a brilliant scientist that can also kick ass when necessary. Suffice to say it rates highly on the “so bad it’s good” scale. Ed Harris also pops in as the Secretary of State, and who doesn’t like Ed Harris?

Aside from Garcia and Harris (and yeah, Butler, too), this is a pretty brutal cast. Sturgess is probably the worst offender, and his engagement to Sarah (Abbie Cornish), a secret service agent, spawns no end of cringe-worthy lines alongside a palpable lack of chemistry. Talitha Bateman, creepy as hell in Annabelle: Creation, stinks as Butler’s daughter, and so on. It’s bad.

Don’t tune in hoping for a well-constructed plot, either, because you won’t get it. The setup is silly, the conflict is odiously manufactured, and if you can’t figure out the “twist” coming a mile off this might be the first film you’ve ever seen. Ultimately it doesn’t matter much since the cast seems incapable of pulling off something better.

As mentioned earlier, not all of the film’s CGI is created equal. For whatever reason, some of what you’d think would be more straightforward scenes end up looking the worst. Terrible attempts to humanize some of Dutch Boy’s destruction add to the cheese factor, such as when a dog is seen dodging a bunch of tornadoes. When the crisis abates, the dog survived. So the fact that millions perished is totally cool.

Fifteen minutes of generic behind-the-scenes stuff comprises the entirety of Geostorm‘s extras. The casting and back story ones offer precious little, but “Wreaking Havoc” gives a six-minute look into the film’s special effects, both practical and CGI. There’s some unintentional comedy for treating the plot like a serious thing as well.

Supremely cheesy yet undeniably watchable, Geostorm is a passable excuse to turn your brain off for 90-plus minutes and bask in the computerized destruction and corny acting.

By HC Green
Tags: Andy Garcia, Blu-ray reviews, Disaster movies, Ed Harris, Geostorm, Gerard Butler, Movie Review, Twister
This entry was posted on Wednesday, January 24th, 2018 at 7:17 pm and is filed under Herija Green, Movie Reviews. You can follow any responses to this entry through the RSS 2.0 feed. Both comments and pings are currently closed.