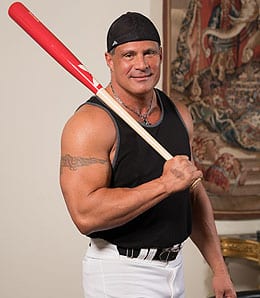 Jose Canseco will be bashing fans’ questions out of the park.

One of baseball’s biggest sluggers — and most controversial players — from the late ’80s/early ’90s will headline a new Las Vegas show designed to give sports fans a truly intimate and interactive experience with their heroes.

Each athlete will recount little known tales from their career and then field questions from the fans, with the promise that nothing is off limits.

Two-time World Series winner Canseco, for his part, is fully expecting fans to forgo the easy questions and go right after the sensitive issues. RotoRob had a chance to chat with the original Bash Brother about the show, his opinions about Fantasy sports and some of his career highlights.

Among the topics Canseco addressed:

Now it’s your turn. Let us know in the comments below what your favourite Canseco moment is.

By RotoRob
Tags: Jose Canseco
This entry was posted on Saturday, January 20th, 2018 at 1:42 pm and is filed under BASEBALL, Interview, RotoRob. You can follow any responses to this entry through the RSS 2.0 feed. Both comments and pings are currently closed.