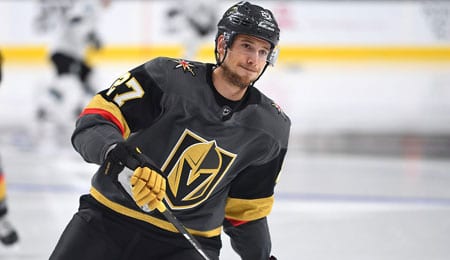 Welcome back to another week of Fantasy hockey. We hope you’re enjoying the 2018 WJC, but don’t forget to use this opportunity to raid the waiver wire while your league mates are distracted by the stars of tomorrow.

This week, Ottawa blueliner Fredrik Claesson earned himself a two-game suspension for an illegal head shot; the Jets, who have slowed down recently, will be without Mark Scheifele for 6-to-8 weeks because of an upper body injury; and the Rangers have lost Chris Kreider indefinitely thanks to a blood clot in his arm.

Shea Theodore, D, Vegas Golden Knights (ESPN: 18.5 per cent; CBS: 50 per cent): This 2013 first round pick is another player that has taken advantage of the opportunities that come from playing for an expansion team. Theodore has picked up his offense lately, scoring two goals with three assists over the last four games (while going +4). He was starting to get more shots last month, but now they are going in with more frequency. Theodore does not have a single penalty this season, but has already matched or broken all his offensive highs — even more impressive when you consider he started the season in the AHL. This kid has some serious offensive chops (and apparently loves meat — see video below), and he’s finally getting a chance to show them, so pick him up while you can.

Pierre-Luc Dubois, LW, Columbus Blue Jackets (ESPN: 22.5 per cent; CBS: 50 per cent): Dubois has gained major Fantasy traction thanks to injuries to Brandon Dubinsky and Alexander Wennberg. Dubois has recorded four points over the last four games and the rookie has gotten better and better as the season has progressed. He’s seeing plenty of time on the second power play unit, helping him average nearly a point per game this month (11 points in 13 December games). It’s hard not to be thrilled with this kid, so jump on him before everyone else figures it out.

James Reimer, G, Florida Panthers (ESPN: 23.2 per cent; CBS: 39 per cent): With Roberto Luongo out, Reimer has been manning the Panther net, and doing a superb job of late, winning his last four starts while surrendering a total of six goals. After a couple of shaky months to begin the season, he’s really stepped up in December, recording a 2.55 GAA to lower this season mark to a more serviceable 3.10. Reimer now has 10 wins on the season, the seventh time he’s reached that plateau. With Luongo out another month at least, give Reimer a look if you need goaltending help.

Thomas Vanek, LW, Vancouver Canucks (ESPN: 22.9 per cent; CBS: 36 per cent): Vanek has been going hog wild lately, enjoying a four-point game last week, an assist last Saturday, and then a five-point explosion on Thursday. It’s the second time in his career he’s put up a five-point game and just the fourth time in the last 20 years a Canuck player has achieved this. Vanek is averaging nearly a point per game this month, and despite seeing less ice time this season, he looks headed for a nice bounce back effort. Of course, having said that, his minutes are rising as the season progresses, so he could be in line for an even bigger second half. Grab the veteran now.

By RotoRob
Tags: Shea Theodore, Vegas Golden Knights
This entry was posted on Saturday, December 30th, 2017 at 4:45 pm and is filed under HOCKEY, RotoRob, The Wire Troll. You can follow any responses to this entry through the RSS 2.0 feed. Both comments and pings are currently closed.