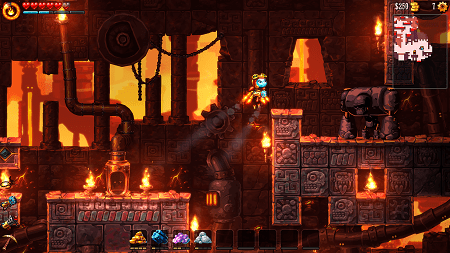 Visually, Steamworld Dig 2 is far superior to its predecessor.

Ever since launching Steamworld Dig on the Nintendo 3DS and PCs back in 2013, developer Image & Form has sought to bring its creation to every conceivable audience. The original’s success spawned Steamworld Heist, a turn-based tactical shooter that was completely different from Dig. Now, Image & Form is returning to its roots with a proper sequel, Steamworld Dig 2.

Fundamentally the same as its predecessor, Steamworld Dig 2 puts a decent number of abilities at your disposal (though you won’t start with all of them): digging, sprinting, jumping, shooting, grappling and using a limited-burst jetpack. It’s solid, but the inability to combine most of your skills — for instance, you can’t swing your pick while jumping — or dig/shoot diagonally feels limiting, even though it was almost certainly a conscious design choice.

Mapping also felt counter-intuitive to us, and it was commonplace to accidentally launch a bomb when we only meant to jump or some other function when returning from playing other games. After a few minutes our brains would re-calibrate, but still, something was a little off relative to how similar games are laid out.

Played on the Nintendo Switch, Dig 2 has a pleasant, colourful look on both the TV and the touch screen (which is the version we played primarily). The design is clever, often dangling the most valuable minerals and secrets in hard to reach spots that require some thought. Enemies don’t really resonate, though, and it’s weird that the most intimidating of them appears about halfway through and then never again.

There’s no spoken dialogue here, with an Animal Crossing style of jibberish accompanying word balloons. It’s fine. The story isn’t so dense that anything is lost by reading instead of listening. The music is solid enough, as are the effects.

In Steamworld Dig 2 you play as Dorothy, who is searching for Rusty, the original protagonist that disappeared at the end of the first game. Your search will take you to a town that has suddenly been afflicted with earthquakes. You decide to investigate as part of your ongoing search for Rusty, and determining their cause becomes the main thrust of the story.

It isn’t much, and the true appeal of the game is its “Explore, Collect, Upgrade, Repeat” approach, which is necessary for advancement. Basically, you’ll head down into the mines, collect minerals, return to the surface, sell them and then use the coin to purchase upgrades for things like your armour, pick and bag for additional carrying capacity.

Although the objectives are mostly linear, there’s never any urgency to tackle them quickly, and the game allows you to wander around as much as you’d like. In addition to mining for gems you’ll also discover hidden areas, self-contained caves and battle enemies. A quick travel system allows you to return to the surface instantly, though if you’re not near one or are defeated you’ll lose part of your haul.

That creates a risk/reward system in which you have to decide if you want to press on as your lantern is burning out in search of more loot or if you should double back and get paid — the incentive for grabbing as much as possible is that you’ll earn a bonus based on your experience level to be paid above the rocks’ actual value.

It’s a good idea, but unfortunately the risk dissipates as you progress and buy items that do things like prevent your lantern from fully extinguishing or allow you to teleport back to the surface from almost anywhere. Given that returning to town maxes out your health and water (used for bombs) instantly, deaths become rarer the further you go.

One thing that Steamworld Dig 2 does better than the original is changing up the gameplay, especially within the self-contained rooms that often feature a themed puzzle, such as manipulating mine carts onto switches to open doors. It’s nothing mind blowing, but they do serve to break up the digging and jumping you’ll be doing much of the time.

In regards to time, you should be able to finish the game in around eight hours, assuming you do a reasonable amount of gathering resources and exploring. There is some post-credit content in which you play from your final save, but we’d had enough by the time we’d toppled the final boss and weren’t inclined to track down the remaining artifacts. Still, it’s available if you’re itching to extend the experience.

Steamworld Dig 2 is an evolutionary step up from the original, adding better graphics, smoother gameplay and RPG elements to a solid formula. It’s a solid eight-hour trip, even though the challenge tends to trend in the wrong direction.