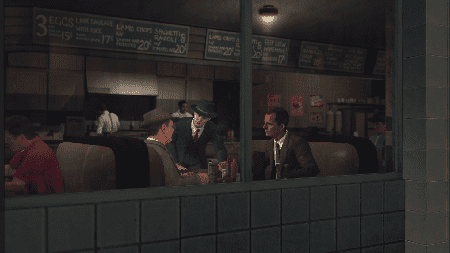 Twenty cents for lamb chops!?! They better be delicious.

Six years after asking gamers to walk the crime-ridden streets of post-WWII Los Angeles, Rockstar has brought back LA Noire to modern systems with a fresh coat of paint. Despite the game’s age, stepping back into the loafers of Cole Phelps feels surprisingly fresh as its story, setting and gameplay style are anything but the industry’s usual fare.

If you’ve played any of the Grand Theft Auto games you should have little trouble adapting to this with both driving and on-foot movement feeling like classic Rockstar. There isn’t nearly as much action here, however, as you’re restricted as to when you can draw your weapon and much of your time is spent investigating crime scenes or interrogating suspects.

Easily the biggest change from the original to the remastered version is how those interrogations are handled. Gone are the truth/doubt/lie options, replaced with Good Cop, Bad Cop and Accuse. In execution it’s a small difference, but it meshes with Phelps’ behaviour more accurately than what we dealt with back in 2011.

Yes, L.A. Noire has been remastered for 4K, but don’t go into it expecting a full rebuild. Although it clearly looks significantly better, you won’t be mistaking it for current-gen envelope pushers like Uncharted 4. The signature facial animations that were introduced for the game is still the highlight, and there’s also ample beauty in 1940s Los Angeles, even if it seems a bit on the unpopulated side.

As with other Rockstar titles, the voice acting throughout L.A. Noire is excellent. Music ripped from the era is good, as is most of the original score, but some of the background tunes recycled during crime scene investigations can become a bit grating.

In L.A. Noire you’re not a criminal, a superhero, an Army ranger or an assassin. You’re just a run-of-the-mill patrolman when the curtain raises, and even as the game follows your ascension through the ranks of the Los Angeles Police Department you’ll find the character of Cole Phelps to be a moral beacon in a city full of corruption. It’s a significant and refreshing departure from the norm.

When it came out it represented a dramatic departure from other Rockstar titles, offering a much more streamlined experience. Mostly gone are the side quests and mini games found in the GTAs, replaced by a focused storyline comprised of 26 cases — that includes five missions that were originally offered as DLC. There’s an overarching storyline that ties things together, but cases are largely self-contained.

By its very nature, the process of gathering evidence and building a case is time consuming, which ensures the pacing of L.A. Noire won’t be embraced by everyone. As meticulous gamers that like to proverbially leave no stone unturned when playing we found it satisfying.

Finding clues generally serves one of two purposes, either unlocking a new lead or as a means to extract information from witnesses and/or suspects. Each time you interview someone you’re given three choices (Good Cop/Bad Cop/Accuse) for how to respond to the information they’ve provided. Correctly identify the statements and you’ll be rewarded with additional dialogue that provides more insight. Choose wrong and that line of questioning concludes.

At the end of each session the game will let you know how many you got correct, at which point you’ll be rewarded with experience points. These help you gain ranks that unlock items like new outfits, hidden vehicle locations and intuition points. Intuition points can be used during investigations to reveal all clues on your mini map or in interrogations to remove an incorrect answer. It’s a smart system that works well most of the time.

There are some inherent weaknesses with the crime solving in L.A. Noire, however. First is that you tend to follow the same script from one case to the next in the way things evolve with clues leading to new locations and eventually an interrogation room showdown. Perhaps more damning is that you cannot really screw up a case. Even if you miss crucial bits of evidence, misread all the responses and accuse the wrong person everything still works out in the end.

Despite being mostly cerebral, L.A. Noire contains some intense action, including shootouts and pursuits (both on foot and vehicular). One of the cooler elements of the pursuits is that they’re not designed to go on indefinitely so even if you can’t run a fleeing vehicle off the road yourself you’re secure in the knowledge that eventually a scripted event will bring the chase to an end.

In addition to the game’s 26 cases there are 40 optional street crimes, which are primarily action-heavy dispatch calls. As a little added incentive to explore the streets of Los Angeles there are also some hidden cars to drive, historic landmarks to discover and golden film reels/badges to find.

Even with that you’re likely to have seen the vast majority of L.A. Noire in less than 20 hours. Once you’re done you can replay cases or enter into free roam and explore the city, but it’s debatable how much additional mileage you’ll get out of that.

If you’ve never played L.A. Noire, it’s an easy game to recommend thanks to its unique setting, strong characters and smart gameplay. If you’re already a seasoned detective returning to walk the beat again, your mileage may vary.

By HC Green
Tags: L.A. Noire Remastered, LA Noire, Rockstar, Video Game Review, WWII
This entry was posted on Wednesday, November 29th, 2017 at 1:29 am and is filed under Herija Green, Video Game Reviews. You can follow any responses to this entry through the RSS 2.0 feed. Both comments and pings are currently closed.