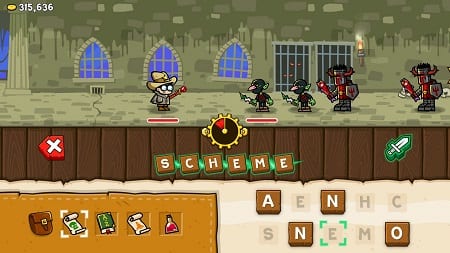 Having served as a writer/editor for years now, we have a fondness for vocabulary — and, of course, a fondness for gaming. While those two passions rarely intersect, developer 10tons Ltd. is taking a stab at it with its word game/RPG hybrid, Spellspire, which is new to the Nintendo Switch after being previously released on numerous other platforms.

Although we didn’t play the PS4 or Xbox One versions, it’s hard to imagine that playing Spellspire on the Switch (or Vita) would represent anything but the best possible experience given how much more efficient it is to create words using a touch screen versus a controller. Deleting one letter by touching it again takes some getting used to, but it’s a mostly straightforward process.

In terms of presentation this could be a mobile game with ultra simplistic graphics and repetitive snippets of “music.” Your character’s loadout will change, and enemies differ enough that you can tell what they are to gauge strengths and weaknesses. That’s about the size of it. Then again, the reality is you’ll spend most of your time staring at the letters so it doesn’t much matter.

At its core, Spellspire offers a simple concept: make words from a collection of 10 letters that then conjure a spell to fight enemies. The longer/more complex the word, the more damage the resulting projectile will inflict. Defeat all the enemies on a level and you ascend the 100-storey tower with a boss fight waiting every 10 floors.

Beyond the basics there are some RPG elements as well with your character able to equip a wand, robe and hat with various statistics and properties. You’ll need to buy and upgrade them with gold, which is earned by completing levels. Each one can be replayed as often as possible, including a “star” run that buffs your foes and requires you to absorb no damage to complete.

It definitely provides the game with some depth and replay value, but there are annoyances with the need to swap out wands and gear based on what enemies you’re facing on a given floor. It’s not the idea that’s the problem, it’s the execution.

Enemy strengths, weaknesses and attack times are contained within a compendium that can only be accessed via the store. You’ll also change your equipment there, meaning you’ll spend too much time adjusting strategy and gear. It isn’t ruinous, but it feels like it could’ve been streamlined more efficiently to keep you in the game.

In addition to changing gear you’ll also need to adopt some strategy as the game lines up enemies like a gauntlet, so you’ll need to be sure you’re saving your more difficult words for the stronger foes rather than wasting a seven-letter doozy on something that only needs a three. In the heat of the moment it’s easy to lose track of what you’re facing, which also speaks to the similarity of some weaker foes to strong ones.

No matter how adept you are at formulating words, success or failure has an undeniable element of luck based on the letters you draw. Thankfully, it’s quick and easy to restart a level with a new selection of letters, and hopefully creating a more plausible path to victory.

That isn’t the only marker for success, though. Upgrading and purchasing new equipment is essential as you climb, which is fine, but it’s priced significantly higher than what you’ll earn by clearing (and then starring) a level. That means you’ll need to grind levels to slowly collect the gold necessary to advance. It’s not the greatest approach.

Even with all its efforts, Spellspire is fundamentally the same game from the first floor until you delve into the dungeon. As such, it’s best enjoyed in shorter bursts (we found 15-to-20 minutes to be the sweet spot). Minus any story elements, however, it’s well suited to pick up and play on a moment’s notice.

While it brings an interesting mash up to the table, Spellspire struggles with its sameness and the inherent need to frequently revisit levels in order to progress. It’s fine as a distraction for aspiring wordsmiths, but it falls s-h-o-r-t of what it could’ve been.

By HC Green
Tags: 10tons Ltd., Nintendo Switch, Spellspire, Video Game Review
This entry was posted on Monday, November 27th, 2017 at 7:06 pm and is filed under Herija Green, Video Game Reviews. You can follow any responses to this entry through the RSS 2.0 feed. Both comments and pings are currently closed.