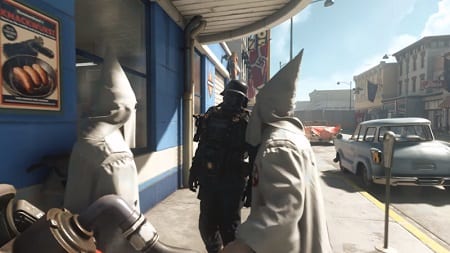 A direct sequel to 2014’s The New Order, Wolfenstein II: The New Colossus picks up right where the original left off, revealing that longtime series hero William “B.J.” Blazkowicz survived his grievous wounds. Things are still very wrong in the world, however, and the only way to set them right is to kill Nazis… a lot of Nazis. Count us in.

Although it frequently offers the chance for a stealthy approach, Wolfenstein II‘s action reminded us of another Bethesda shooter, DOOM. There’s something liberating about dual-wielding massive triple-barreled shotguns and blowing Nazis to pieces, and it also fuels that same kind of disconnect where it’s supposed to be a fun shooter and not some ultra-gritty realistic experience.

To that end you’ll have all manner of weapons at your disposal, from the mundane (pistols, SMGs) to the delightfully absurd (pretty much all the “heavy weapons”). How you choose to play will doubtless influence your selections — for instance, the pistol has a silencer that makes it the best for low-profile killings — but every weapon feels meaty and satisfying.

In terms of setup, nearly everything should feel immediately familiar, though we’ll toss out a pair of minor frustrations. First, the sprint is absurdly fast. Sure, there’s a storyline reason for it, but it’s ungainly and hard to control. Second, weapon selection (hold) and throwing grenades (tap) are mapped to the same button, which led to tossing grenades by accident, wasting them or tipping off our enemies.

Unlike its predecessor, which straddled console generations, The New Colossus was built for the Xbox One and PlayStation 4, and it shows. The setting of a Nazi-controlled United States in the 1960s is well done, and the game bounces around enough to create diversity between the levels. Character and enemy models look crisp, and the amount of blood and gore has been ramped up.

Perhaps the most surprising thing is how emotional some of the storytelling is, and much of that can be credited to the smart, unapologetic dialogue and excellent delivery from the cast. In a genre that tends to recycle the same handful of archetypes liberally, Wolfenstein creates three-dimensional characters that evoke real reactions — we legitimately hated Frau Engel — and the game is all the better because of it.

As mentioned, Wolfenstein II begins right where the last game ended, with Blazkowicz green-lighting a nuclear strike at his current location. Since he’s the toughest SOB on Planet Earth, he survives, only to have the U-boat he’s recovering on get attacked by Engel. She captures him and is prepared to execute him when her own daughter facilitates BJ’s escape.

Despite that, Blazkowicz’s body is deteriorating rapidly, necessitating that he wear an exo suit to move around. Believing he has little time left, BJ decides his best course of action is to kill as many Nazis as he possibly can and help spark a revolution to liberate the United States from Hitler‘s oppression. To do that he’ll need to recruit help and take on a series of dangerous missions.

Those will take him and his crew to a bombed out New York, Roswell, New Mexico, and New Orleans, and even all the way to Venus to enact their plan. It’s a pretty standard resistance storyline with you hitting high-value targets, but it deals with uncomfortable subjects (primarily racism) in a mature way and yet still finds time to give the crew fun moments. It’s a very effective mix.

Levels are designed to offer multiple ways to accomplish your goal, and like the last one, many sections contain commanders that will summon reinforcements if alerted. This allows you to minimize combat if you’d prefer to duck through vents and use silenced weapons to take them out, or go in guns blazing and eliminate waves of enemies before proceeding.

Whichever way you play will earn perks across three categories: stealth, mayhem and tactical. There are 18 missions in all, each with four levels to complete before gaining mastery, and each time you move up a level you’ll receive some kind of buff — such as increased ammo capacity or taking less damage from certain types of attacks. It’s a good system that naturally rewards your play style.

The New Colossus is also chock full of stuff to find, including weapon upgrade kits, news articles, notes, and more collectible type things like concept art and record albums (with actual songs). Scooping up enigma codes from deceased commanders opens up missions to take out high-ranking Nazis, provided you can decipher the codes via a mini-game.

There are some frustrations along the way, most notably the lack of feedback when you’re killed. With levels offering multiple paths, the majority of our deaths occurred from unseen enemies and you’re just left to try again and wonder where it came from. Enemy A.I. can be inconsistent as well, though mostly in how competent they are at detecting you.

As with The New Order, this game contains no multiplayer or online component. It’s not needed, however, as The New Colossus is a marked improvement over its predecessor and the excellent campaign does more than enough to justify its asking price.

Loaded with action and featuring a surprisingly emotional storyline, Wolfenstein II: The New Colossus is one of the more enjoyable first-person shooters we’ve played in years.

By HC Green
Tags: Bethesda, The New Order, Video Game Review, Wolfenstein, Wolfenstein II: The New Colossus
This entry was posted on Tuesday, November 7th, 2017 at 8:45 pm and is filed under Herija Green, Video Game Reviews. You can follow any responses to this entry through the RSS 2.0 feed. Both comments and pings are currently closed.