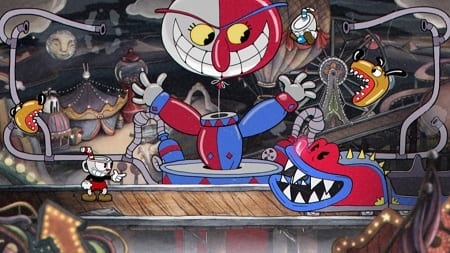 It looks even better in motion.

It’s been more than three years since Cuphead first appeared in an Indie montage as part of Microsoft’s 90-minute E3 briefing. It would appear at each of the next three E3 events, gaining more and more time and attention with each passing year. And now finally, the wait is over, as developer StudioMDHR has unleashed Cuphead for patient Xbox One owners hungry for worthwhile exclusives.

Given its difficulty, Cuphead relies on the precision of its controls to succeed, whether on foot or during the game’s assorted flying levels. With the former your basic options are to jump, shoot and dash, and within that you’ll be able to parry pink-coloured objects and build up a powerful “ex shot” to unleash for additional damage.

Although this all functions admirably, the default setup is awkward with every important function placed on the face buttons. That makes for some finger contortion when trying to execute these moves in rapid succession, particularly implementing the dash. Fortunately, the game allows you to remap the buttons as you see fit, which we’d recommend you do early on to incorporate the triggers.

Flying levels handle even better, allowing you to zip in between projectiles along with the new ability to shrink — making you harder to hit but reducing your damage dealing. You can still parry as a plane and build up for an awesome ex shot that transforms you into a bomb to detonate on enemies. It’s all very challenging, but the controls do their part very well.

Beyond the execution, the creativity involved in boss designs deserves effusive praise as well. They’re incredibly distinctive, and the cleverness with which they morph and attack is genius. We don’t want to discuss much about individuals bosses since: (a) there’s too many to single out; and (b) it’s more fun if you go in fresh, but suffice to say they’re the highlight of the game.

There’s also a great soundtrack here, featuring hours of original jazz, ragtime and big band style music that serves to push you even deeper into the retro world. The announcer is spot on, recreating that distinct style of delivery and vocabulary we tend to associate with that era. Everyone that was drawn in by glimpses of the presentation should love the final result.

Our intrepid heroes, Cuphead and Mugman, strayed into a casino run by the Devil, and after a hot streak of tossing dice, made the fateful decision to go all-in on one last toss: win and they get all the Devil’s money, lose and their souls belong to him. They lost. Now, in an effort to get out of their deal, Cuphead and Mugman are sent out to collect the souls of delinquent debtors.

Such is the story of Cuphead, a game that will challenge your skills at nearly every turn. There are four types of levels: boss fights (the most common and difficult), run-and-gun (more traditional platformers), flying (a subset of the boss fights) and mausoleums (parrying ghosts). Each presents its own unique challenges, but the bosses are the attraction.

Each boss level will have two difficulty settings, and you can advance by completing it on either one, but you’ll need to beat each boss stage on “regular” to collect the soul needed to finish the game. Once you topple the Devil, a third, more punishing difficulty will be unlocked.

Even on the lowest setting, which is shorter and omits entire sections of the tougher version, Cuphead will test your skills. You’re always limited to a few hit points, cannot gain health during a battle and will be asked to contend with all manner of attacks. This game will test your patience — we needed dozens of runs to topple some bosses — and you need to be okay with that to enjoy it.

While most of Cuphead‘s challenge comes in the form of devilishly clever design, it does incorporate some randomness with attack patterns and the like. The goal is clear enough: keep things fresh and don’t allow the game to become a study in memorization. That sounds good, but the reality is these changes dramatically alter the challenge from one run to the next. It can be frustrating.

One effort to help gamers (and increase replay value) is the ability to purchase new shot types and charms that can be equipped to boost your chances. For example, the chaser always hits the nearest target but deals minimal damage whereas the spread does heavy damage with limited range. For charms you’ll get things like extra HP or the “smoke bomb” dash that turns you invisible and makes it so you don’t take damage while doing it.

It’s hard to put a run time on Cuphead because so much depends on your skill level as the boss fights themselves aren’t incredibly long, but if you have to play it 50 times those minutes add up. It’s a classic “your mileage may vary” experience.

With its impeccable production values and refined level design, Cuphead is a beautiful game that’ll push your skills to the limit.

By HC Green
Tags: Cuphead, E3, Jazz, Microsoft, Ragtime, StudioMDHR, Video Game Review, Xbox One
This entry was posted on Monday, October 16th, 2017 at 9:17 pm and is filed under Herija Green, Video Game Reviews. You can follow any responses to this entry through the RSS 2.0 feed. Both comments and pings are currently closed.