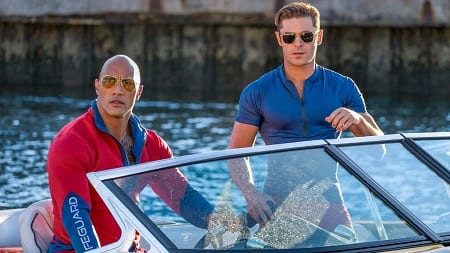 Too much this, not enough bikinis.

About two months ago we sat down with a copy of CHiPs, the latest old-show-to-new-movie effort that bore a minimal resemblance to its inspiration, reusing names and a few basic ideas while sprinkling in the odd cameo as a nod to the past.

Well, it’s déjà vu all over again as Baywatch hits the home market with a very familiar bag of tricks up its sleeve.

Emerald Bay is hiring new lifeguards to its team, known as Baywatch. With only a handful of spots available and dozens of candidates, the tryouts are brutal. Overseeing the process are returning members Mitch (Dwayne Johnson), CJ (Kelly Rohrbach) and Stephanie (Ilfenesh Hadera), but they’re thrown a curveball when washed out Olympian Matt Brody (Zac Efron) is placed on the team as part of his community service.

With Brody and a pair of fresh recruits on board, the Baywatch team gets down to the business of saving lives. When drugs (and later, dead bodies) start washing up on shore, however, things get even more real for the team. Rather than engage the police, Baywatch decides to investigate with a focus on newcomer Victoria Leeds (Priyanka Chopra), whose arrival as owner of an exclusive club has coincided with the drugs.

Despite the protests of Brody, Mitch and company are determined to track down the source of the drugs and bring irrefutable proof to the proper authorities. Can they work together to bring down the bad guys? Or is Baywatch out of its depth?

Although it’s not nearly as good, Baywatch has a Something About Mary vibe to it, thanks mostly to the relationship between the smoking hot Rohrbach and out-of-shape Jon Greenbaum, who plays Ronnie. They have probably the best chemistry of any on-screen pairing, and there’s no shortage of dick jokes and raunchy humour throughout.

It’s hard not to like The Rock, even if his confrontational relationship with Efron never really finds the mark. He just has good timing, and, of course, the physicality to stand out (as does Efron). There is a couple fun secondary performances from Rob Huebel as Mitch’s boss and Yahya Abdul-Mateen as a beach cop. Also, bikinis!

For whatever reason, there just aren’t many laughs to be found. Even when things and situations seem like they should produce chuckles, they don’t. We’re not sure if it’s a lack of chemistry or something else, but the bottom line is that Baywatch isn’t all that funny.

As noted, Efron and Johnson just don’t click, which is a major problem since they’re the focal point of the film at the expense of the ladies; Hadera, one of just six people in the squad, has an incredibly small role. It also doesn’t help that Alexandra Daddario, who set the Internet aflame with her role on True Detective, underwhelms as the new female recruit.

There is some brutal CGI surrounding a boat rescue, and we do mean brutal. At no point does the fire look realistic, and the entire thing is bad. It’s a comedy/action movie about hot lifeguards. It didn’t need CGI, and if the budget wasn’t there to make it look remotely real it shouldn’t have been included. To be clear, this isn’t goofy dolphins doing high fives CGI. It’s meant to be serious.

One thing that really stuck out among the typical selection of behind-the-scenes pieces is how often the cast talked about chemistry and how much fun they had making the movie. All of which is interspersed with awkward “spontaneous” goofing around. It’s odd.

Also odd is that probably the funniest scene on the Blu-ray is found in the deleted scenes — crossed signals leading to someone thinking Ronnie is gonna blow him. No clue why that was cut, particularly from an extended unrated version. It’s legitimately funny.

It’s obvious what Baywatch wanted to be — a raunchy action/comedy popcorn flick — but Johnson and Efron don’t click, and the women sacrifice too much screen time to that duo’s efforts.

By HC Green
Tags: Baywatch, Blu-ray reviews, CHiPs, Dwayne Johnson, Emerald Bay, Kelly Rohrbach, Zac Efron
This entry was posted on Tuesday, August 29th, 2017 at 5:00 pm and is filed under Herija Green, Movie Reviews. You can follow any responses to this entry through the RSS 2.0 feed. Both comments and pings are currently closed.