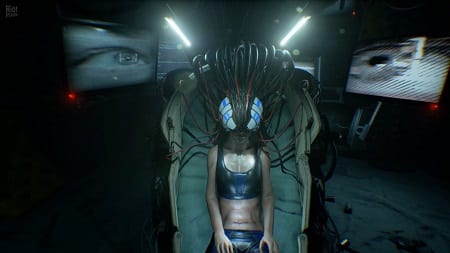 Future’s so bright ya gotta wear…. a, um, a colander?

It’s no accident that developer Bloober Team pegged Rutger Hauer to play the lead role in its newest release, Observer, as the game features the same type of story-based sci-fi as Blade Runner, which starred Hauer opposite Harrison Ford decades earlier. It isn’t the first game to ape aspects of Ridley Scott‘s classic, but it does so quite well.

With a heavy focus on investigation and only a few moments when you need to move with anything resembling haste, Observer just needs its controls to be competent, and they are. Most of your time will be spent toggling between your two enhanced vision modes: Bio and EM. The former allows you to see and scan organic material while the latter looks for electronic signatures to examine.

Our only issues with those are related to visual clarity, and the rest of your options are straightforward as you can sprint (albeit at a fairly leisurely pace), crouch and interact with various objects. There’s a mini-game found on in-game PCs as well in which you’ll escape spiders and collect treasure. It’s primitive but turn based so there are no issues there, either.

We’ll give an approving nod to the world design and unsettling nature of your dives into the minds of various people, but at a nuts and bolts level Observer is ugly. Nearly the entire game is spent poking around a dark, grungy apartment complex or within the truly bizarre “flashbacks” you encounter when you jack into a subject’s consciousness.

Making things even worse is that you’ll need one of the two filters on for a substantial chunk of your time, and they muddy up an already bleak and seemingly monochromatic world. At a practical level it works alright since items to check will glow, but straining to see what’s going on becomes exhausting at some level the longer you play.

Hauer leads a pretty solid group of voice actors that helps lay out the game’s dark story. There’s a good number of people to talk to (through apartment doors) and stories to hear, and the dialogue is generally well written. The soundtrack is unremarkable.

Set in Poland circa late 21st century, Observer casts you as Detective Lazarski (Hauer), who conducts his work by hacking into the minds of suspects/witnesses via the Dream Eater. Augmentation is the new norm in this futuristic world, which has endured both war and a digital plague, allowing a company known as the Chiron Corporation to take root as the region’s de facto government.

While sitting in his patrol vehicle, Lazarski gets a bizarre phone call from his estranged son, Adam, and decides to investigate the source of the call: a dilapidated apartment complex. Upon arrival you discover a crime scene with a dead body, though it cannot be positively identified. After a lockdown is triggered, you have no choice but to investigate what happened, and hopefully find your son.

Outside of a few moments there is no action to be found. This is a psychological thriller/mystery that tasks you with unraveling its ever-expanding story. It’s interesting and well told, but the actual investigating would’ve benefited from a better interface as the filters and constant digital hash that accompanies your desynchronization eventually becomes wearying.

It’s a pretty claustrophobic experience as well, in that the vast majority of the game takes place within the same dark apartment complex with its narrow hallways and repetitive door clusters. There are times when it’s atmospheric and creepy, but eventually you figure out nothing is going to happen in the real world and it loses its edge.

Hacking into the minds of the victims — a practice that’s strictly forbidden — creates some totally bizarre trips through dream worlds. It’s completely abstract, showing collections of images or weird locations rather than straight memories of previous events, though there are nuggets to decipher within. They also play host to most of the game’s creepiest aspects.

At times, some of that creepiness is accentuated by the grainy visuals and frequently changing locations, but at others it becomes more of a distraction as the sequences drag on too long and feel too disconnected from reality. While we don’t want to dwell on the graphics, we keep circling back to the feeling that a little more clarity would’ve really helped.

Beyond the main case there are some secondary objectives you can investigate, and you’re free to talk to a number of residents, though you’ll never see them, to flesh out the world. There’s also a fairly clever mini-game found on the various PCs you come across. Both help pad out the game’s length and are worth pursuing.

Observer tells an interesting story, building toward a satisfying conclusion, but it would’ve benefited from cleaner graphics and more diversity in the locations.

By HC Green
Tags: Bloober Team, Observer, Rutger Hauer, Video Game Review
This entry was posted on Saturday, August 26th, 2017 at 2:17 am and is filed under Herija Green, Video Game Reviews. You can follow any responses to this entry through the RSS 2.0 feed. Both comments and pings are currently closed.