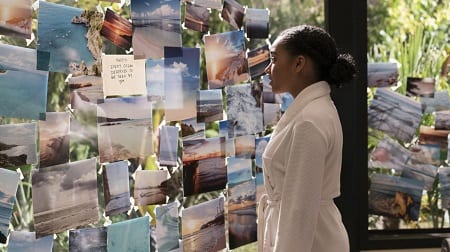 Little known fact: shut-ins are immaculately groomed at all times.

Based on the young adult (YA) novel of the same name, Everything, Everything features a lot of little-known talent in major roles. Director Stella Meghie is helming just her second film, and you’d be forgiven if you didn’t recognize leads Amandla Stenberg or Nick Robinson from smallish roles in earlier blockbusters The Hunger Games and Jurassic World.

Do these relative newcomers, adapting a story from a first-time author no less, bring a fresh perspective to the YA romance genre?

Maddy (Stenberg) suffers from a rare immune deficiency known as SCID, and as such the 18-year-old has been confined to her home from a very young age. She’s cared for by her mother (Anika Noni Rose) and longtime nurse Carla (Ana de la Reguera), and she seems generally happy spending her time doing short book reviews and taking courses online.

All of this is turned upside down when a new family moves in next door, introducing Maddy to Olly (Robinson), and the two of them take an immediate liking to each other. Things start innocently enough, but eventually they develop feelings for one another that lead them to push the boundaries of what’s safe given Maddy’s condition.

When Maddy leaves the safety of her home to check on Olly she ends up getting sick again, leading to her mother piecing together the relationship and looking to further restrict their access to one another moving forward. A taste of life outside her bubble has Maddy wondering what could be, however, and she must decide whether living in isolation is really living at all.

Despite being mired in an absurd story, Stenberg and Robinson do their best to sell it. Stenberg, in particular, is engaging and pleasant, even if the film does her character a huge disservice by first removing what should be an agonizing decision (whether or not to leave the safety of her home) and what later should be a sense of wonder (truly experiencing life for the first time).

For about 20 or 30 minutes, when the relationship is in its infancy, Everything is a rather pleasant romance with the kind of innocence that embodies the best aspects of young love. Looking back, it also shows what could’ve been had they elected to make something more grounded in realism and emotion as opposed to what they wound up with.

Even with the caveat they we’re not the target audience, Everything is rife with problems. It’d be an exercise in futility to touch on them all so let’s focus on the big ones. There are way too many plot holes stemming from the use of the most convenient, least plausible ways to explain how to get from Point A to Point B in the story arc.

For example, Maddy, who is 18, is somehow approved for a credit card online. This card is then used (we assume) to buy new clothes, fund an impromptu trip to Hawaii, rent a car, stay in a plush cabana, travel back to Hawaii, head to New York, and on and on.

Money is apparently not a concept in this world, as Maddy’s mother somehow owns a multi-million dollar home in Southern California complete with state-of-the-art SCID-battling tech and a full-time nurse/chef on payroll. OK, she’s a doctor, but still. Making it worse, one of Olly’s complaints about his father is that he’s “not good at holding a job,” and yet he lives next door to a super affluent doctor?

It’s one of a dozen or more plot threads or sequences that either don’t hold up to scrutiny in any way (like Maddy’s apparent ability to swim, even though they act like she didn’t later on, or why exactly two people can visit Maddy — why not anyone else if all it takes is some delousing?) or go absolutely nowhere (Olly’s dad is abusive, Carla’s daughter is Maddy’s only friend).

As frustrating as all of that is, it pales in comparison to the “big twist” at the end. We don’t want to get into it, but it’s so dark and at odds with the film it’s amazing it’s in there. And just to make matters worse, this life-changing event is almost immediately swept under the rug in a sprint to the credits.

Roughly 15 minutes of deleted scenes and a short making of featurette comprise the bonus materials. For the most part, the unused content adds very little, but there is a scene that at least tries to add a little gravitas to the movie’s twist. They should’ve left it in.

While the leads are mostly likeable, the story of Everything, Everything is a colossal mess. Unless you enjoy sap without any semblance of reality we’d recommended looking elsewhere for your romance fix.

By HC Green
Tags: Amandla Stenberg, Blu-ray reviews, Everything Everything, Movie Review, Nick Robinson, Stella Meghie, The Hunger Games
This entry was posted on Thursday, August 24th, 2017 at 9:51 pm and is filed under Herija Green, Movie Reviews. You can follow any responses to this entry through the RSS 2.0 feed. Both comments and pings are currently closed.